Dinesh Agarwal – Creator of the most intelligent business platform Indiamart 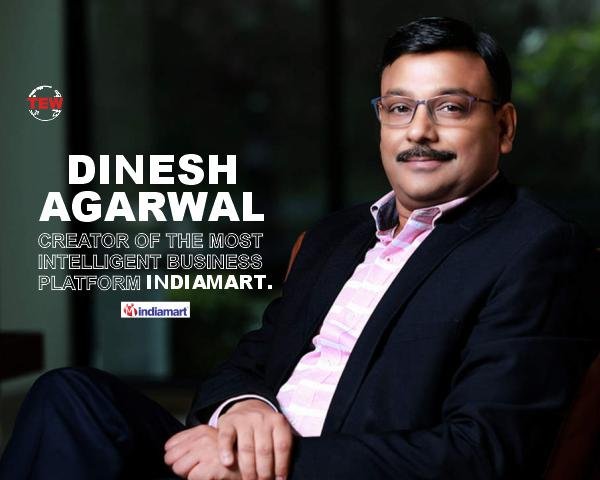 Dinesh Agarwal – Creator of the most intelligent business

Now and then an innate desire of becoming an entrepreneur pops up in all of us but only a few dare to step into the world of startups and business and even fewer make it past the 5-year mark.

Apart from all the gains and stature an entrepreneur attracts, the dedication, years of hard work, sleepless nights, etc. that one has to endure and tackle without moving a single inch is the price that this choice demands. All the hurdles, struggles, troubles, etc. make the world of startups an ultimate testing ground that separates the best from the rest.

As the title suggests, we are talking about one of the best startups in the world, IndiaMart. Dinesh Agarwal who worked in HCl Technologies for 6 years since 1990. He was working as a net consultant, making him understand the untapped potential of the internet and the impact it can have on Indians. The benefit it would entail to the Small-Medium Enterprises (SMEs), he carved the opportunity, he came back to India.

He formed the startup, InterMesh which used to make websites for Delhi based companies, marking as the beginning of his entrepreneurial journey.

IndiaMart was created as a directory for keeping the websites his company created, evolving as an online meeting place for exporters and importers. Dinesh Agarwal knew that SMEs do not have lavish budgets to advertise and IndiaMart would prove to be the perfect place for it.

Started from generating inquiries through personal contacts, SMEs started pooling in as they saw the value, and initially, IndiaMart had around 70,000 businesses, 1000 paid subscribers, and generated businesses worth Rs. 400 crores.

The Journey of Dinesh Agarwal and IndiaMart

The journey of Dinesh Agarwal wasn’t that easy as a major challenge arrived during the e-commerce bubble burst in the year 2000, in which IndiaMart managed to retain some profits. Agarwal knew the way ahead was to go global making IndiaMart a global marketplace from where buyers and sellers around the world can get the goods in their premises.

Another hurdle that gave them a setback was the terror attacks in the USA in 2001, causing a 40 percent dip in the revenues and the global economy plummeted.

All this did not stop Agarwal and without flinching, he moved ahead with all his heart and there was no turning back ever since.

With more than 50 lakh buyers, 10 lakh registered suppliers, and over 50,000 paid customers, making IndiaMart the second-largest B2B marketplace and online player after the Chinese giant Alibaba.

IndiaMart currently produces business in the upwards of Rs. 10,000 crores.

Dinesh Agarwal’s story may seem one without any major hurdles and turbulences but that is exactly how every success story looks and sounds. The story of his success is one that has influenced people all over the world and showed the world the potential of the internet and its use to the benefit of one and all.

It is easy to think about forming a startup but it is not simple to form and run one. It takes an intuitive idea, efforts, discipline, an immovable spirit, etc. but the most important things being a firm belief upon oneself and a learner’s mind. These are some of the prerequisites that make people like Dinesh Agarwal stand in the hall of fame with the most successful businessmen and entrepreneurs on the planet.

PrevHow Virtual Workplace Parties Can Enhance Employees’ Welfare Ahead of Christmas?
How Were UK and US Businesses Impacted by the Pandemic?Next