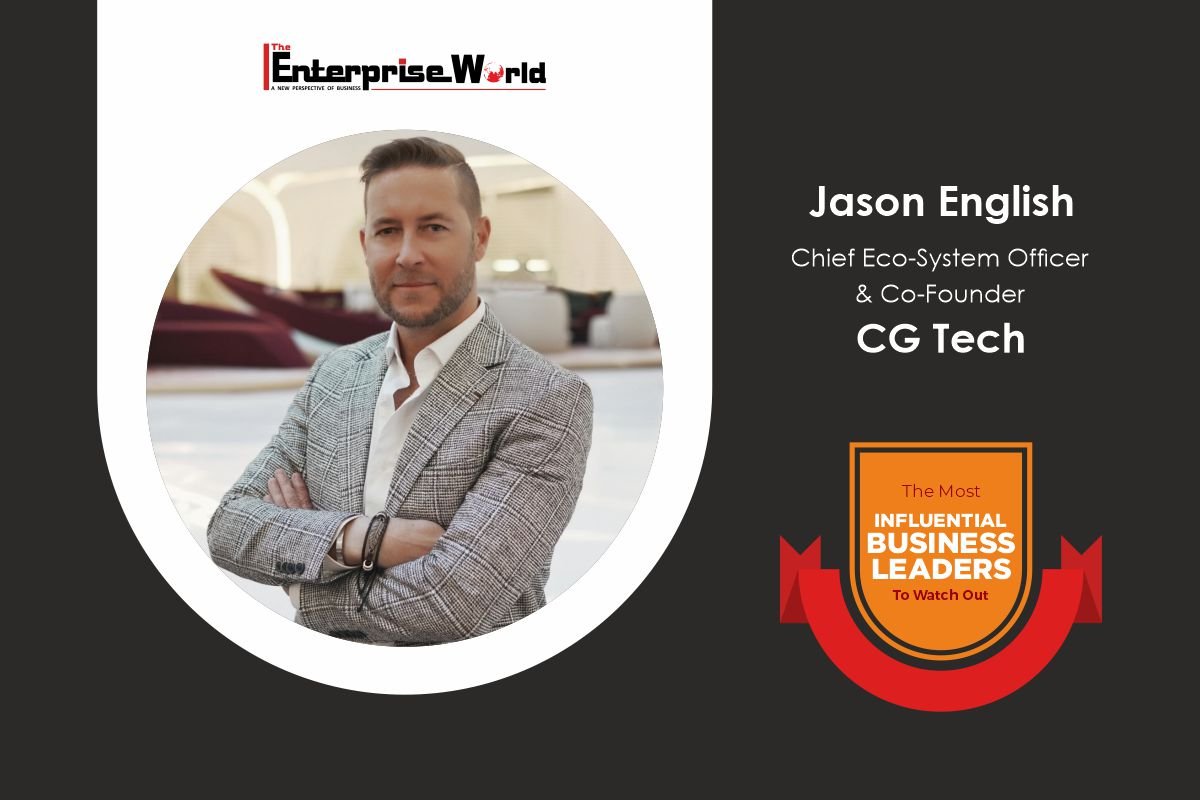 The uncertainty of the 2020 pandemic showed people that to thrive and succeed in this unpredictable era, companies needed to continually adapt and innovate in order to scale at speed. At this point, this is not a surprise to anyone.

The key challenge in technology innovation is that it’s hard to find developers to complete the projects which companies have on books. Barring the digital and agile maturity levels, most companies are faced with a lack of skill and talent which ultimately hinders the easy and rapid adoption of the digital infrastructures needed for agility.

Featuring for The Enterprise World’s this issue of The Most Influential Business Leaders To Watch Out is Jason English, an Entrepreneur, Author, Speaker, and Chief Eco-System Officer and co-founder of CG Tech.

Jason worked in the corporate world for 15 years, before going down the entrepreneur route. In 2012 he decided to leave the corporate world to go on a journey to build the business he wanted. One that would be an inspiration to others and that would make a difference in the lives of all who associated with us.

In 2014, a group of private investors invested in Jason’s idea, which sparked the beginning of a journey to build an international group.

“In 2015 Jason hired a COO and soon after bought 50% of a company in Dubai aimed at expanding our horizon into the middle east oil and gas space.”

In 2016, the team started a drone company based out of London and acquired an electrical company in South Africa, and later in the same year acquired Al Laith.

In 2018 Jason did a merger with New Age Engineering in South Africa and established CG Tech as a holding group company.

In the same year, the team set out to formalize the group of companies, and Jason became the Chief Eco-System Officer at CG Tech and they repurposed the drone business into a SAAS business called The Virtulab.

In January 2020, the CEO of Al Laith retired and Jason came to Dubai to look at the business to determine what kind of CEO was required to take over. Covid broke 4 weeks later, and so Jason, together with his family just never went home and found himself taking on the role of CEO at Al Laith alongside his role at CG Tech. In 2020 the team established Serious International to support the film production industry on the back of a shortage of media content.

“I started out this journey by leaving a stable career for an unstable, risky entrepreneurial journey. I had no backing, and very little support and went from working at a corporate company with more than 10000 employees to a garage of 3. It was the scariest thing I had ever done. Looking back now and seeing how Jason English have formulated a group of companies that employ thousands of people and positively impact hundreds of communities around the world is something that makes me proud every day.”, says Jason.

The Journey of CG Tech-

Cash Flow is always a major issue for an entrepreneur, especially during growth stages. Finding the right people who believe in your vision and recruiting the teams to back your vision is difficult. The reason behind the CG Tech company’s success would definitely be the incredible group of people who work within the group companies.

They understand the clients, the industries, and the way business operates and works. It’s also the culture that everyone builds within an organization.

“I like to create a clear vision that is short, memorable, and easy to understand.”

Once the direction is set, the focus is clear, to build a team that supports that vision. As a leader, Jason emphasizes including many people in the workplace as everybody’s contribution is important, and many people can bring different perspectives to the table.

“The next focus is building strategies that support giving effect to my vision through measurable KPIs that are reviewed and realigned as required on a frequent basis.”, says Jason.

At the end of the day, every business is made up of people. People sell your product or brand and therefore are an integral part of the company . In a service-type business, this is particularly more important as the people are outward-facing and often interact at some level with clients.

When a business has a workforce, those same people are part of the communities in which you operate, their families rely on the way you treat them for survival in many cases, and so taking care of your workforce is critical to success.

Of course, that doesn’t mean letting workforces take advantage of a company , CG Tech, but it does mean respecting each other’s needs and managing that appropriately. In addition, developing your workforce and enhancing their ability to get career promotions goes a long way toward earning loyalty.

“Looking after your workforce and treating them fairly has from my experience only ever yielded great results and it’s the reason why one of our core values is “People first”.”, adds Jason.

“We exist to Serve, Solve and Uplift and aim to build businesses that inspire those they serve.”

Prommac was established in 2005 and provides mechanical, electrical, Instrumentation, maintenance, shutdown, and project management services to a variety of industry segments across South Africa.

Al Laith was established in the Middle East in 1995 and provides design and engineering, as well as project management and execution of technical temporary infrastructure projects around the Middle East and has been recognized as the leading one-stop provider of rental solutions in the Middle East.

New Age Engineering Solutions was established in 2002 and has been recognized as one of the top structural and piping construction consultancies in South Africa.

Serious International was established in 2020 and has been recognized as a leading provider of temporary and permanent sound stages for the film production industry across the United Kingdom.

The Virtulab was established in 2006 and provides consultancy, software, and APP development solutions for the industrial and events sectors globally.

“Jason English ’re constantly looking at new products and services that add value to our clients.”

With additive manufacturing becoming mainstream, and advancements in technological innovations occurring at speed, the team hopes to play in some interesting spaces soon.

CG Tech has also launched its CG Innovation Fund which is a complicated but unique incentive scheme for executive employees around the world. Sharing the success and pain of a collective group can be powerful and whilst this platform is at an early stage of the process, this could be a real game changer in CG Tech business world.

Some key focus areas for the company, CG Tech as they move out of 2022 include:

As the businesses grow, global uncertainty, growing pains, cash flow/working capital, funding/capital expenditure, management depth, systems capacity, team culture & quality, and safety all become critical to the CG Tech company’s success. If the growth can’t be funded, the next possible scenarios are to either slow down or the team runs out of money. Neither of which is a great outcome.

Growth is good, but not at the expense of purpose and values, and so managing the way CG Tech onboards, trains and maintains its people is fundamental to long-term survival. Maintaining culture when the world is in a state of chaos is always difficult and therefore remains a core focus for the company , CG Tech .

With the world’s inflation rising, staying on top of and being proactive when it comes to managing costs, maintaining margins, signing into long-term contracts, client creditworthiness, and currency fluctuations are important elements for CG Tech to remain focused on.

How the pandemic has fostered minds to a more innovative way of thinking, and more importantly, how necessary is innovation in a dynamic business landscape?

“The post-pandemic period has been really interesting. I think the world bounced back far quicker than anyone ever imagined and that was really good for our industries. Specifically, film and entertainment, events, and music festivals. Even in the industrial sector, many projects were sidelined and they too came back quickly post-pandemic creating a shortage of capable companies that downsized and let go of core staff during the pandemic.

Our approach within the CG Tech group was to not get rid of anybody, focus on supporting communities and supply chains and emerge stronger through hiring additional talent, deploying emerging technologies, and spending money on marketing and training to ensure our teams were ready for the bounce back. Before covid, some of our businesses were digitally transformed, and others were not.

Jason English were using zoom in 2018 already, Google Suite since 2015 and building digital solutions since 2016. These became the norm during the pandemic and certainly are here to stay beyond the pandemic. But the ability to work remotely is far more accepted by society and businesses. The use of digital, collaborative technology is now the norm everywhere.

I’ve always been a supporter of innovation. Whether it was when the first computers were launched, or the first mobile phones, I always spent time learning and understanding the technologies. Today that trait is more important than ever as the world’s variety of technologies collide together to create an abundance of everything and I like to implement technology that makes us more efficient, more relevant, and more accurate in what Jason English do.

I believe that technology and innovation play an important role in business in general.

Firstly it’s important to note that innovation comes in many forms and is not only technology-driven. Improvement in a process is a form of innovation. The problem with technology is that usually a tech company is developing software and then trying to shove it down the throat of companies in a one size fits all strategy.

The opposite is also true when companies have a problem and try to find solutions without knowledge of the tech space.

What I have found at CG Tech is that Jason English have established a blend of experience within our traditional companies, a group of tech experts within our skunkworks business, and collectively by working together, they develop solutions that actually solve real-world problems or come up with innovative ways of improving processes.

This combination has seen our traditional companies grow exponentially and so technology and innovation play an extremely important role in how we think about the business.”, says Jason. 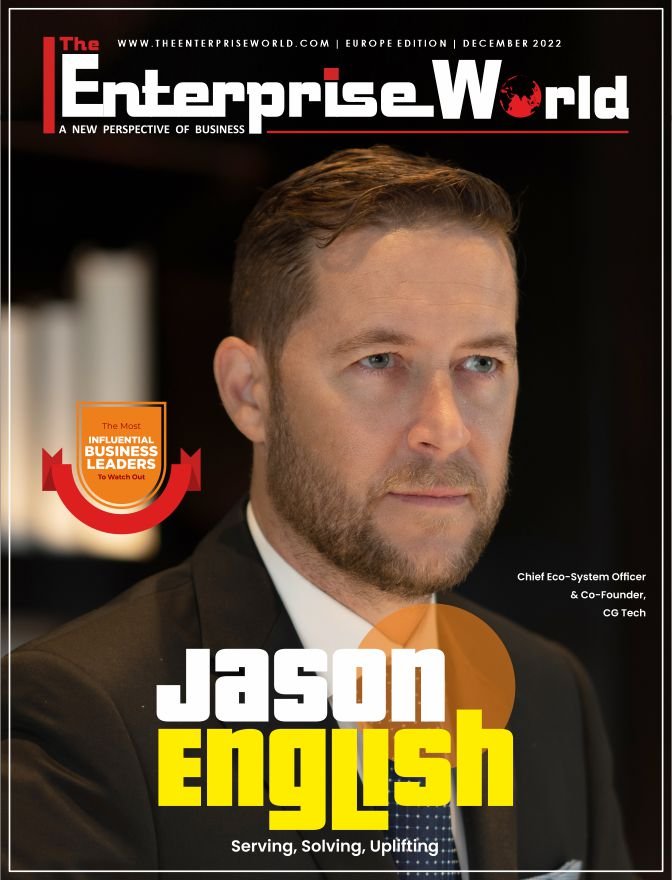 The Most Influential Business Leaders To Watch Out