Munich – A Celebration of All Things Good 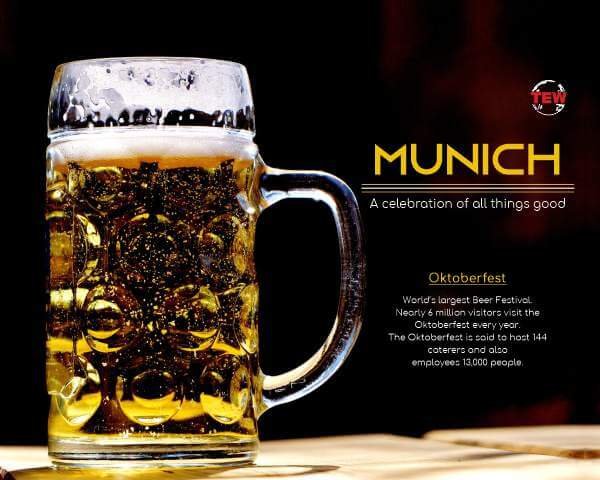 Munich or also called Muenchen is the capital and the most populous city of the German state of Bavaria. Munich is the third-largest city in Germany after Berlin and Hamburg. It is home to about 6 million people.

The city sits on the banks of River Isar, a tributary of the Danube, in the north of the Bavarian Alps. It was in the year 1806 when Bavaria was established as a sovereign kingdom and Munich became a major European center of arts, culture, architecture, and science. In the 1920s, Munich was home to several political factions.

The city was declared as the Capital of the Movement after the Nazis rose to power. Following this, during World War II, The city was heavily bombed, but the city restored most of it later. After the end of the postwar American occupation in 1949, in the following years, Munich saw an increase in population and economic power. These years of the boom are also referred to as the “economic miracle”.

With a stabilized economy and developments, The city hosted the 1972 Summer Olympics. The city was also one of the host cities of the 1974 and 2006 FIFA World Cups. Today, with technological advancements already under the belt, Munich is a global center for art, science, technology, finance, publishing, innovation, culture, education, business, and tourism.

The city enjoys a very high standard of living, and according to Monocle’s Quality of Life Survey 2018, it was rated as the most livable city. It is also considered as the alpha-world city according to the Globalization and World Rankings Research Institute. Needless to say, Munich is one of the fastest-growing and the most prosperous cities in Germany.

The Economy of Munich, Bavaria

Most of the economy of The city is based on high-tech automobiles, the service sector, and the creative industries. IT, biotechnology, engineering, and electronics among the other sectors are also some of the major contributors to the economy of the city. Compared to any other German city, Munich has the strongest economy and the lowest unemployment rate.

Some of the multinational companies like Siemens, BMW, MAN, Linde, Allianz, and Munich have their offices in the city. The city also has a great share in research and houses two research universities, multiple scientific institutions, and some of the world-class technology and science museums like the Deutsches Museum and the BMW Museum.

The city is an important financial center, second to Frankfurt. The city is home to HypoVereinsbank and the Bayerische Landesbank. The city is known to outrank Frankfurt as the home of insurance companies like Allianz and MunichRE.

Tourism has risen as another major industry in Munich. With the numerous architectural and cultural attractions of the city, sports events, exhibitions, and it’s very own, the prestigious Oktoberfest attract many tourists. The city hosts nearly 530,000 people of foreign background, which makes up about 37.7% of its entire population.

Architecture, Sports, Culture and Much More!

The city has a unique blend of historic and modern architecture. This was because the historic buildings were destroyed in World War II and then were rebuilt in the later years. There are over 100 historic destinations over the world and Munich makes the 30th rank.

There are four grand royal avenues from the 19th century with official buildings that connect Munich’s inner city with its then suburbs.

The Brienner Straße, starts at the Odeonsplatz and opens into the Königsplatz. The area around this is a home to the Kunstareal, the gallery, and the museum quarter of Munich. The Ludwigstraße also begins at the Odeonsplatz and runs from north to south around the St. Louis church, Bavarian State Library, and many other state ministries and palaces.

The Maximilianstraße starts at the Macmillan-Joseph-Platz and runs west to east. This avenue is known for the designer shops, luxury boutiques, Jewellery stores, and much more. The Prinzregentenstraße runs parallel to the Maximilianstraße. There are many museums on this avenue like the Haus der Kunst, the Bavarian National Museum, and the Shackgalerie. This avenue crosses the Villa Stuck and also Hitler’s old apartment.

Apart from the architectural fascinations in the city, Munich is also a city with its interests in sports. Football, Basketball, Ice Hockey, Swimming are some of the popular sports played in the city. Bayern Munich, a professional football team is originally from Munich. It is Germany’s most successful club and also a multiple UEFA Champions League winner. Munich has also hosted Olympics games including the 1972 Summer Olympics games and the 2018 Winter Olympics. It has also hosted the 2006 Football World Cup.

Munich is considered a major international cultural center. The city has played host to some of the renowned composers like W.A Mozart, Carl Maria von Weber, Richard Strauss, and many more. Music is of special importance to the city of Munich; the city hall permits 10 musicians every day for performing in the streets around Marienplatz.

Many festivals go around the year in the city. Among them, the most prominent and famous of them all is the Oktoberfest. This is the world’s largest beer festival which runs for nearly 16-18 days from the end of September through early October. Originally, the Oktoberfest is a celebration of the wedding of the Bavarian Crown Prince Ludwig to Princess Therese of Saxony-Hildburghausen. Over the last 200 years, the Oktoberfest has grown to a span of 85 acres and nearly 6 million visitors visit every year. The Oktoberfest is said to host 144 caterers and also employs 13,000 people.  With a mix of culture, sports, economics, and much more, Munich is one of the celebrated cities in Bavaria, Germany!