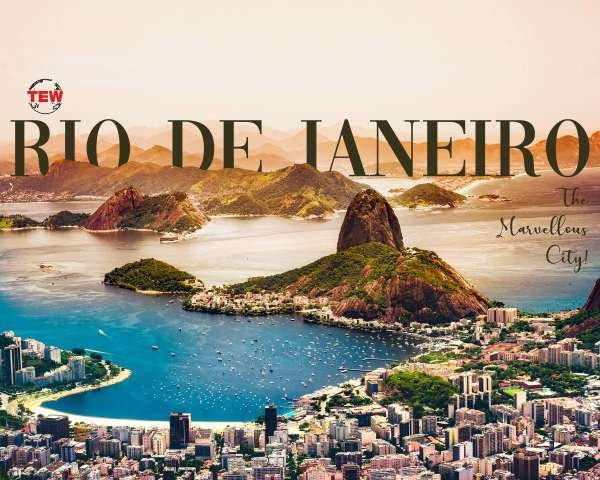 Rio de Janeiro is the second-largest city in Brazil, Rio de Janeiro is also known as Rio. The city was founded by the Portuguese on 1 March 1565. Earlier there used to be groups of 7 tribes that spoke 20 different types of languages. When the Portuguese were ruled over the whole of Brazil, they made Rio de Janeiro their capital from 1763 to 1822. After this, when Brazil became independent, this city remained the capital of Brazil until 1960.

Even though Rio is no longer the capital of Brazil, it still has a lot of importance from the business and historical point of view. Rio de Janeiro hosted the 2016 Summer Olympics and Summer Paralympics. This made it the first South American city to have hosted these events. A Music Festival celebrated in the city called Rock in Rio is the world’s largest music festival.

Rio de Janeiro has a strong and highly diverse economy, with a large number of jobs in heavy and light industries, manufacturing, commerce, finance, trade, and other services.

A new electronics and computer field has been added to the old industries of metallurgy, engineering and printing, and publishing. Other manufacturing sectors focus on shipyard-related materials, textiles and footwear, textiles, nonmetallic mineral products, food and beverages, chemicals, and pharmaceutical products.

In order to attract industries, the state government has designated some of the outlying areas of Rio de Janeiro as districts where infrastructure has been provided and the land is sold under special circumstances. Oil and natural gas from farms along the northern coast of the state of Rio de Janeiro city is a major asset used to develop manufacturing enterprises in the metropolitan area of Rio, making it possible to compete with other major cities for new investments in the industry.

In Greater Rio, which has the highest per capita income in Brazil, retail is important. Many important retail stores are located in the center, but some are scattered in commercial areas of the district, where shopping malls, supermarkets, and other retail businesses account for a large share of consumer trade.

Every year, products made of iron and steel other than crude oil are exported in large quantities from Rio. Located on the seaside, this city is also a major port and this city plays an important role in the economy of the country.

Rio is one of the major tourist destinations in the world. The vibrant culture of the city and the many museums, historical sites, and physical features attract tourists around the globe.

Millions of people from all over the world come to see the Carnival Festival in Rio in February. In the past, carnival processions were used to create traffic jams so a wide stadium-like permanent arrangement has been made by Oscar Niemeyer in 1982.

This city is very famous for picnics. Every year around 2.5 million people come here to visit. It has been awarded the Best Places for Tourism by World Travel Awards. The southern part of the city is more developed and wealthy while the western part covers 50% of the city area; the city has a population of about 6.5 million. And it is the second-most populous city in Brazil after São Paulo. São Paulo’s population is almost double that of Rio, more than 12 million.

You will be surprised to know that there is a large population of women in this city. Yes, women constitute 53.2% of the population while males are only 46.8%. It is the largest city outside Portugal, where the Portuguese language is spoken.

Hotels in Rio have higher fares than hotels in other cities in the country. Rio’s 5 Stars Hotels have the second-highest number of fares after New York. Rio de Janeiro’s Maracanã Stadium is one of the largest Football Stadiums in the world. The capacity of this stadium is to seat 78,838 people, but on July 16, 1950, nearly two lakh people watched the football World Cup final over there.

Munich – A Celebration Of All Things Good

In the eighteenth century, the clergyman Maria Boss expressed her desire to erect a magnificent religious monument to Queen Isabella. But she did not pay any attention. Later, the Catholics decided to raise funds, organized various programs, and raised funds for it. But there was not much space in the city, so instead of the city, Kakarevado became a place at an altitude of 7210 feet above sea level. This statue of Jesus Christ has a spread arm, weighing 650 tons. It is not homogeneous; it is made by joining pieces.

Rio’s ‘National Library of Brazil‘ is the 7th largest library in the world. There are more than 90 lakh items here.

There were red trees on the coast of Brazil which was used to make a red dye. It was in great demand in Europe. The people of the tribe at that time planted it vigorously. In Portuguese, red was called Brazil. So when the Portuguese came to power, they named the area as Brazil.