The Story of Clive Palmer 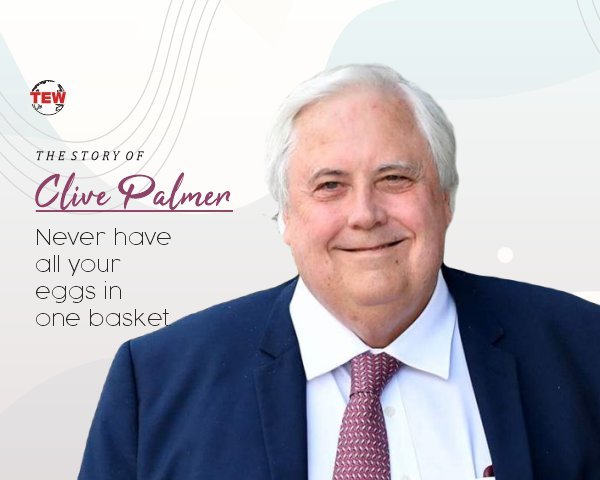 Never Have all your Eggs in one Basket

Business and start-ups and tales of entrepreneurs and businessmen are often heard and told around and about. There are a lot of businessmen who tried different domains of business and have their success stories behind them. One should always learn that settling is a good option but moving ahead and taking risks is something that keeps one motivated, which in turn gives one a reason and an aim to strive for more.

But little do we hear about the tales of businessmen who not only stuck to business in a particular field but also tried various domains and fields trying out new options and opportunities alike. It not only requires a strong dedication, courage, and will to explore uncharted fields and territories, but it is equally thrilling and enchanting. This is the story of Clive Frederick Palmer an Australian businessman in real estate, minerals, owning a football team, etc. he was also a politician and a member of Parliament.

Business opportunities are like buses, there’s always another one coming.

The man, The Story, The Beginning:

Clive Palmer was born in Footscray, Victoria in 1954, and moved to Goal Coast, Queensland as his asthma worsened due to pollution. He went on and finished school and joined the University of Queensland studying Journalism and Law. He later dropped out of college and began his journey in the field of business, as he acquired a real estate license and started working as a real estate agent. He made a fortune in the property boom of Gold Coast in the 1980s and retired from the industry at the age of 29, making around $40 million (Australian).

In 1986, he turned to the world of mining and started three companies with an interest in mining exploration, one of which was Mineralogy which acquired large stakes of prime iron ore in Western Australia. In 2006, he leased his mines to Chinese government-owned – CITIC Ltd. worth $2.8 billion in today’s money, including royalties on any ore produced. Clive Palmer later acquired Queensland Nickel and the Palmer Nickel and Cobalt Refinery in 2009.

He used Queensland Nickel to fund his political ambitions, using $20 million to fund Palmer United Party, later known as United Australia Party. Clive Palmer always had an interest in politics, he was a member of the conservative National Party since the 1970s. He volunteered as campaign director for the Queensland state election in 1983, later became its spokesperson. He was awarded life membership of the party in 1992 but left in 2012.

In 2013, he resurrected the United Australia Party, naming it to Palmer United Party, and later won the Sunshine Coast seat of Fairfax in the Australian federal elections. He served as MP for one term and disbanded the party in 2017. He again resurrected the party rebranding to United Australia Party, ended up running candidates for lower house seats in the 2019 federal election with Clive Palmer running for the Queensland senate seat, the party failed to acquire any seat.

Clive Palmer over his business and political journey ventured into many fields and domains. Clive Palmer bought Gold Coast United in 2008, also opened a dinosaur park called Palmersaurus. In 2012, he announced his grand plan to resurrect the doomed ship – Titanic.

The take from the story, the excerpts from the life of a Tycoon:

We can learn and understand a lot from the experiences, the story, and the history of Clive Palmer. One should always strive for success, no matter the cost, the price, just dedicate yourself, never mind the hard work put in, and make sure you repeat the cycle and one day you will be in the hall of fame which these tycoons and legends share.

Success is not final; failure is not fatal: it is the courage to continue that counts.