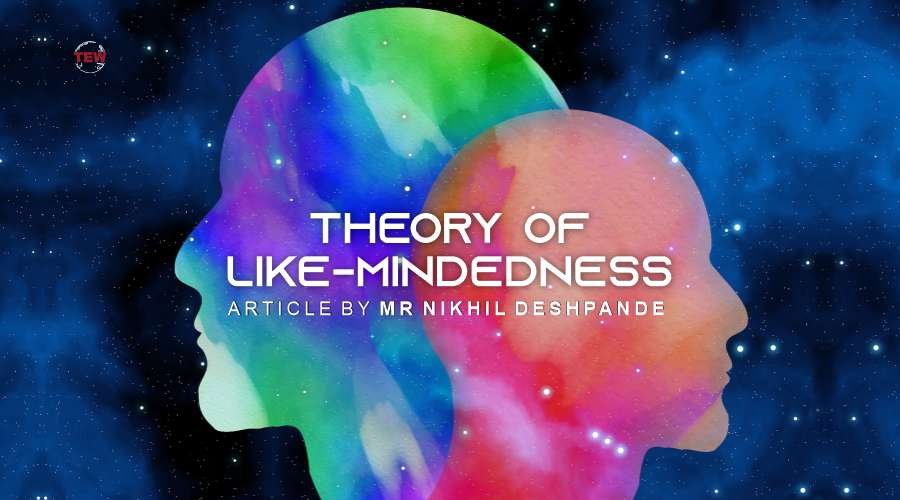 This Theory of Like-mindedness mentioned below can be used in the field of HR and recruitment, psychology, psychiatrists, doctors, counselling, investigation and in any other field. This theory may also be used on a day-to-day basis by companies, common man, parents and it can also be taught in schools, colleges, universities and institutes.

This Theory of Like-mindedness is based on psychology. Psychological aspects of human beings consisting of different behavioural styles are being highlighted. A person may be judged by the company he keeps. The type of company a person keeps (Hindi and Marathi language it is known as ‘Sangat’) tends to have a long term impact on an individual’s life. Basically, there happen to be two type of people in the world. Some people have a mentality like that of ‘donkeys’ and the rest have a mentality like that of ‘horses.’ Such persons have a typical manner of thinking. That is Theory of Like-mindedness.

Such type of mentality includes people who do not understand what is right and what is wrong, what is good and what is bad, who normally tend to drift on a wrong path, who do not tend to use logic and common sense, who put their blinders on their eyes and live their lives, who let others take their decisions, who follow a herd mentality, who think everything that is new is beneficial while whatever is old is useless thereby ignoring the utility aspect.

Such type of mentality includes people who have a level of understanding due to which they know what is right and what is wrong, what is good and bad, who use logic and common sense, who are aware about their surroundings, who are thinkers, who think about the future, who tend to make the right decisions, who believe in following what is right
rather than implementing what they think is right, who consider the utility aspect before taking decisions.

Those who tend to find some loopholes and take undue advantage of the same are mostly inclined towards people who have a similar nature, people having a nature of living a lavish lifestyle irrespective of their financial situation like people of a similar mentality, those who try to conserve nature like people who believe in conserving the nature.

In the corporate world, as far as the field of Human Resources is concerned, psychology matters a lot at the time of Recruitment and while retaining the employees within the company. A company that understands the psychology of its employees and provides them with the necessary facilities and a good working environment may be termed as a employee-friendly company. Human beings having similar behavioural traits think they shall be able to spend a good time with someone having a similar nature.

Examples of opposite behavioural styles: Theory of Like-mindedness

People good at mathematics shall not be able to spend a good time with someone who is a poet, in the case of marriages there happens to be a saying ‘opposites attract’ – but in reality many a times it poses a problem in future as both the partners find a difficulty in adjusting with each other, practical people may have a difficulty to adjust with emotional people, decision makers are unable to adjust with people who are of a spoon-feeding nature, mentality of creative persons have a mismatch with persons having a copy-paste type of a mentality.

An intelligent guy who has been hired for a small back-office job would not last long on that particular job as he will always find ways to excel in his life, those who do not wish to make a progress in their lives are the best persons to be hired for small back-office type of jobs, a friend may not like to spend time with his friend who has an opposite nature.

Disclaimer: This happens to be a theory. Sometimes reality may be different from this Theory of Likemindedness.