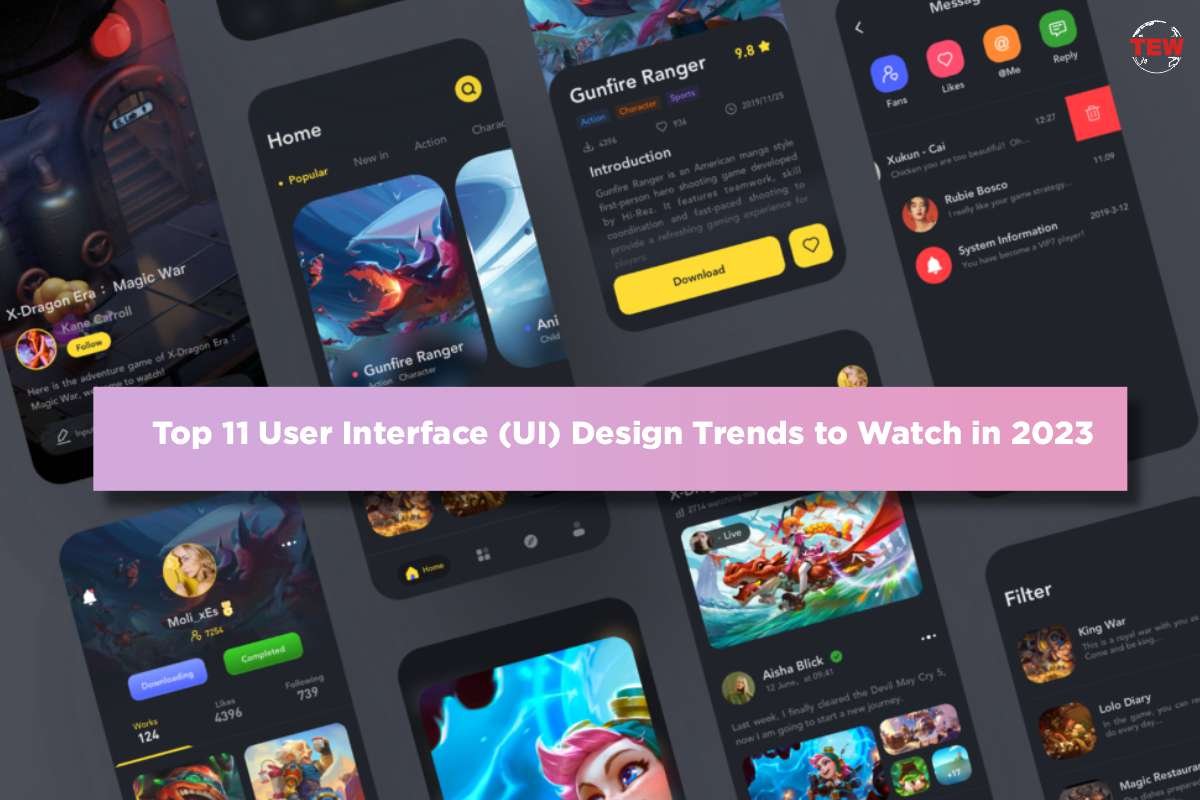 In 2023, designers will focus on the individuality of their target audience while abandoning the pursuit of a “perfect visual.” Let’s spend some time here talking about what’s new in (UI) User Interface Design Trends watch in 2023;

Neumorphism is an approach to design that bridges the gap between skeuomorphism and flat design. It is gaining popularity as a result of its understated but forward-thinking appearance. The user interface (UI) components are positioned in this design such that they are visible only after the backdrop has been loaded. This placement is analogous to the watermark setting.

Micro-interactions are brief periods in which a user and the design engage with one another to provide an interesting experience for the user. It is comparable to paying attention to seemingly little yet fundamentally important things. To provide the impression that the things on the screen are alive and moving, micro-interactions include applying animation effects to such objects.

Dark mode, also known as dark theme or night mode, is a color scheme that turns the standard format to a light-on-dark presentation. Other names for dark mode include “night mode.” It was the official release of Android 10 and iOS 13 that brought the dark mode into the spotlight, and it is currently one of the most prominent trends in user interface design for 2022. Dark mode is being used by well-known companies such as Apple, WhatsApp, and Instagram to enhance the overall visual appeal of their respective mobile applications.

When integrated into user interfaces, illustrations take on the role of practical components rather than decorative embellishments. It makes it possible for users to create messages and carry out interactions in a manner that is not only simpler but also clearer and more appealing. The establishment of aesthetic harmony and the addition of creative flair to the interfaces are both aided by the use of custom illustrations. Because of this, the interfaces are able to differentiate themselves from those of the other companies.

The use of geometric abstractions in both painting and sculpture is where the aesthetic movement known as minimalism got its start. Minimalism may be seen in the visual design work of both established and emerging artists. In user interface design, minimalism is a trend that is user-friendly. It gives people the ability to go on a journey that is easy to understand and serves a purpose by using the fundamental components of the user interface. It has something to do with the trend toward minimalist design and the absence of buttons.

6. User Interfaces that are Activated by Voice

Voice-activated user interfaces enable users to communicate with the UI using speech or voice commands instead of the traditional keyboard and mouse. Incredible strides have been made in user interface design because to the proliferation of voice assistants such as Alexa, Siri, Bixby, and even Google Assistant. They will continue to cause ripples in the design of user interfaces and user experiences as those designs progress in terms of accuracy and use rates.

The primary objective of developing a voice-activated interface was to do away with the need of manually typing via the interfaces. The encouraging news is that people are welcoming this trend with open arms, which is great since it also happens to be an alternative that those who have accessibility concerns may consider.

Users are bored with scrolling, and they are sick of seeing sites packed with an unending amount of content. Because of this, you need some kind of story that can inject some personality into your application or website. When this happens, scrollytelling may be used to narrate the story.

Scrollytelling is an abbreviation that stands for “storytelling by scrolling,” and it refers to a trend in user interface design in which we construct a narrative by using images, typefaces, and text samples. It’s almost like you’re narrating a narrative via pictures, and with each scroll, a new chapter is revealed.

The use of augmented reality (AR) in the design of user interfaces (UI) has been gaining popularity among designers for some time now, and this is a trend that is anticipated to continue for many years to come. The capabilities enabled by AR will make the comprehension of design more simpler, more precise, and ultimately more beneficial.

Additionally, augmented reality technologies make it possible for end users to provide feedback on applications in real time. When thinking about the user interface design with augmented reality, the most essential consideration is the research of user behavior, which includes factors such as age group, amount of time spent, and expectations.

The decade of the 1990s is often referred to as the wild west age of design. The internet had only just been invented. Back then, there were no guidelines for design, and the profession of user experience designer did not even exist. Because of this, the user experience designs used during that time period were distinguished by the use of vibrant backdrops, huge letters, visible table layouts, and robotic typefaces like as Courier. Designs evolved throughout time, becoming more aesthetically pleasing as new design guidelines came into play. When compared to current standards, user interface designs from the 1990s will seem somewhat bizarre

Another potential trend that we have noticed user interface designers embracing lately is the use of natural and pastel hues. In order to provide immersive user experiences, they combine it with minimalist design. The main website for Dropbox is a good illustration of this kind of topic. They employ pastels that are rather amazing.