A Comparison: Film and Digital Photography 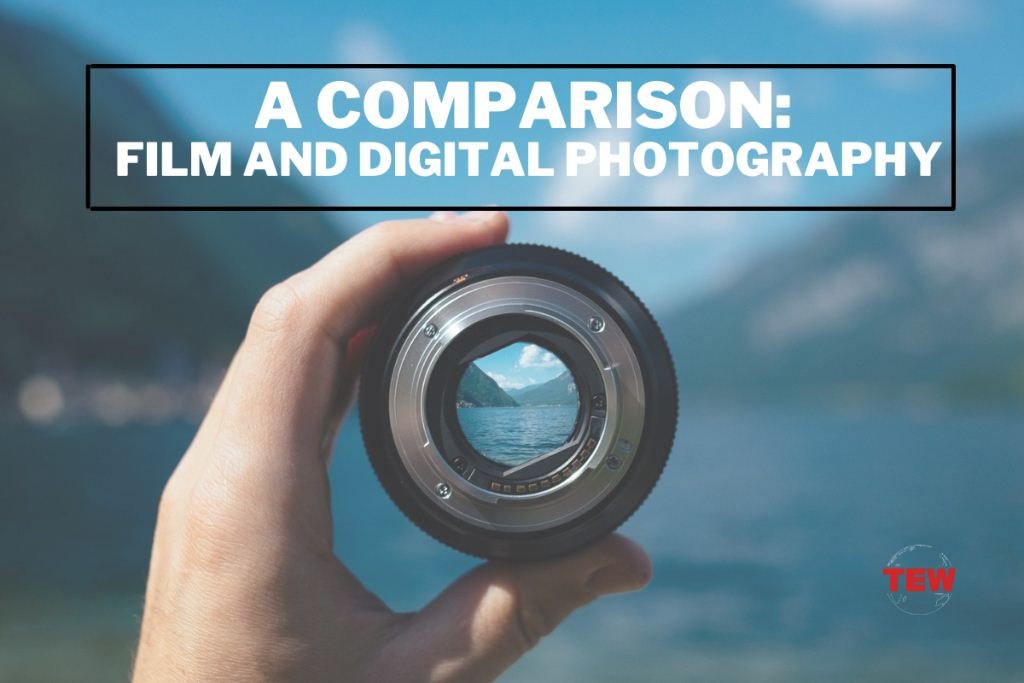 This is an introduction to the main differences between film and digital cameras. Obviously a book could be written about the comparisons between the two and there are such books but this is an introductory look into the two formats. Both have the same purpose; to take photos, of course, but the way that each accomplishes that is somewhat different.

Here we’ll take a look at the differences and similarities of Film and Digital Photography:

How are Film and Digital Photos Captured?

Both of the physical units capture photos in the same way: through a lens that allows light in which is then exposed onto either a sensor (in digital) or on film (in analogue). On a roll of film, the image is captured on silver halide crystals which then react to form the image. This is a complicated procedure but, fortunately, not for the photographer. The great thing about analogue is that it’s a mechanical process which is why a lot of these cameras have no batteries or only a small battery to auto-wind film or power the light-meter for instance. The complete opposite is true for digital cameras which have increasingly sophisticated technology inside them.

A digital camera essentially operates in the same way but the light hits a sensor which then saves the image as data and processes it in-camera as the image we see in Digital Photography. The quality of image isn’t just down to the megapixels as we often hear but also the quality of the sensor which is now capable of capturing 4k video as well as low-light detail. Modern-day sensors and processors are extremely impressive which is why we’re seeing such quality and detail from smartphone cameras even.

Despite the age of film cameras, they are still a mainstream force thanks to the distinctive look of analogue film. And although it’s hard to find actual film in many parts of the world, along with a shop to develop the film, there’s been a bit of a resurgence in film photography. A lot of professional photographers still use film because of its inherent qualities of tone, gradient and colours that are unique to the lens, camera and light when the shot was taken. The magic of digital photography is that it captures a moment in time but with film, it’s even more unique thanks to the inherent qualities of the film and how it’s developed.

Another element of magic is the unknown. While you may prepare for the perfect shot and have everything lined up correctly: aperture, shutter speed, light; the resulting image may not turn out how you expect. In my experience there’s always at least one surprise after getting a roll of film developed; maybe how the light was caught, the focus capturing something in the frame. It’s generally a pleasant surprise though!

There is massive potential with modern-day DSLR and mirrorless cameras, even smartphones are extremely capable these days thanks to hugely powerful processors. A digital camera isn’t only restricted to digital photography but can also be a video camera quite comfortably. Especially as most videos are now seen on social media or youtube, recording, editing and uploading on a smartphone makes the whole process quick and easy with high quality visuals. This really is the advantage of digital cameras: that they have so much functionality all contained within one device in Digital Photography.

The other main advantage of Digital Photography is that you can take hundreds, if not thousands, of photos on just one memory card. This is great when starting out as you don’t have to be so precious with how many snaps you can take; there’s a bit more freedom to experiment and make mistakes. Arguably you may learn more with film precisely because of how precious each frame is; it forces the photographer to really think and evaluate each shot in order to not waste a moment.

Digital Photography also gives you a preview of what the photo looks like (on a small LCD screen) which is handy in some instances. I still try not to delete any of my photographs until I can see them in detail on a monitor – unless of course there’s a glaring error. There are really huge advantages with digital that mostly boil down to sheer processing power which means that your single camera has many functions and possibilities in Digital Photography.

Film’s disadvantages are not hugely limiting but there are definitely hurdles to getting into the field; mainly buying rolls of film and then developing them. There are a lot of online services that offer both but they’re not always available for every country and it’s increasingly difficult and expensive to track down film which is rather restrictive to enter into analogue digital photography. That being said, the quality and colours that you get from film are so wonderfully unique and special that it is really worth experimenting with at least one roll of film if the option is available.

A digital camera is often only the first part of the journey as a huge part of bringing life and color into digital photography is in the editing suite. Post-processing is why digital photos can look amazing and with such incredible detail but without this extra effort, there is a tendency to appear flat and dull. A lot of digital cameras also feature film ‘filters’ that adjust in-camera settings to appear more film-like which is one work-around to editing in Digital Photography. Another potential disadvantage is the battery life but even this isn’t a huge problem now considering that so many modern digital cameras have really impressive battery life – it’s also easy enough to bring along a spare!

Both formats have something to offer to the field of product photography and despite the incredible technological advances of digital cameras, there’s most definitely space for film photography thanks to their unique pictorial qualities.

Andrew Farron works for Fable Studios, a Creative-led boutique video and animation studio that creates tailored brand stories that endure in your audience’s mind. Fable combines your objectives with audience insights and inspired ideas to create unforgettable productions that tell the unique story of your brand.