Alacrinet- A Cybersecurity Platform You Can Rely On 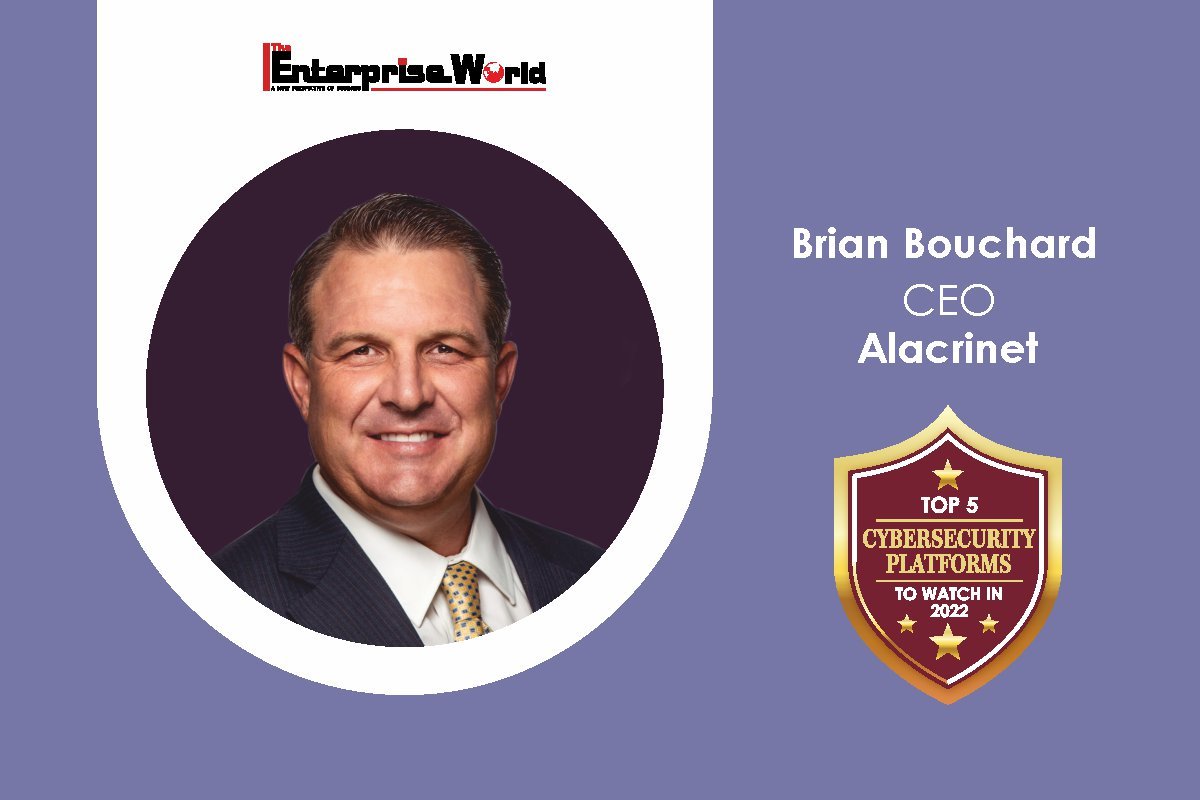 The world has taken a big leap into digitization increasing the amount of data produced, which is growing exponentially every day. A comprehensive understanding of how data and cybersecurity are intertwined and how they can help companies to better determine what kind of capabilities should an organization develops in order to take full advantage of the data they have can take the data collection and its security for companies to the next level.

Because we live in an era where the data is continuously growing, and not just in terms of the infamous three Vs of Volume, Variety, and Velocity, but now there is an addition of a fourth V of Value.

Alacrinet is one such cybersecurity platform that companies can rely on. In The Enterprise World’s issue of Top 5 Cybersecurity Platforms To Watch In 2022, read the company’s journey from just an idea to where it stands today. Featuring the Cover Story of Alacrinet-

Founded in the year 2002, Alacrinet is a cybersecurity consulting company headquartered in Palo Alto. The company quickly took pace and expanded its offices with its East Coast headquarters in Wilmington, Delaware. September 2022 will mark Alacrinet’s 20th anniversary of being a nationwide security services provider and a reliable cybersecurity solution seller.

Having started at the onset of the big internet boom, cybersecurity was just a topic of discussion back in 2002. The fast rise of digitization and a surplus increase in data generated slowly made people aware of its security and how it had to be managed. And that is how cybersecurity took its pace in the wildly changing technological world.

Being there from the very start, Alacrinet has evolved from a general web development service provider to an implementation partner and a developer of some of the most effective security solutions like primary portals, web portals, and content management.

The company specialized in building organizations’ web presence and also building their web portals so that they could better serve their customer bases. Having worked on all kinds of portals in the beginning, Alacrinet primarily worked with IBM. In fact, that is how their lineage started- from being an IBM business partner. Many of Alacrinet’s founders and co-founders have started their journey as IBM consultants.

With an aim to start their own consulting firm, the team left IBM. Their main goal was foraging ahead and acquiring their own customers. Separating from IBM gave them the ability and flexibility to provide customers with a wide range of solutions. It also gave them the freedom to follow the best-in-breed solutions from different vendors. With this process in place, the company could then choose which solutions they wanted and which would be their focal point for specialization.

To fixate on a product or a service, the special tools Alacrinet used were the industry analysts like Gartner and Forester among many others. How these analysts helped is that they ranked different technology stacks and solutions. Gartner has their ranking method called the magic quadrant and Forester’s method is that of the wave chart.

“We followed these industry analysts religiously and then specialized in the top three.”

And then the team would go to the market selling these solutions in different categories.

2012 was the year that proved to be a turning point for Alacrinet when they bagged a big client in the box. With this big client, they were working on a restaurant development system.

“The application we developed helped them establish new restaurants all the way from hiring, onboarding of all the employees to getting the restaurant started.”

The first ever challenge Alacrinet encountered was when the restaurant got breached in their POS system. At the time, several large organizations faced these breaches, including Home Depot and Target to name some. The systems of these organizations got hacked, getting out hundreds of thousands of sensitive credit card information from their POS systems. This information was then sold on the dark web, causing a loss of thousands and millions of dollars.

That was a time when IBM had just bought a solution for cybersecurity called a SIEM security intelligence event management. Basically, IBM acquired Q1 Labs and their product QRadar and had started growing their cybersecurity practice and infrastructure.

It was a great product. Alacrinet recommended the product to its clients and also helped them implement it. And in the process of implementation, the team realized that this was going to be a hot new area for research and development given the risks it created for large and medium size organizations and enterprises.

“From that experience, we as a company strategically decided that we were going to become a cybersecurity expert.”

The team had their tools ready to forage into this space with great in-house technicians, technical people and engineers. This new technology proved to be an advantage to the already existing Alacrinet team, as it was something they could easily adapt and skill-up to, and above that, become a specialist pretty quickly. And thus, their journey began.

Alacrinet divided its focus into two most important things- developing a sales team and with it promoting cybersecurity awareness. This included managing the customer risks and creating a risk profile and assessing their cybersecurity posture.

“We were the early birds developing this process, which is why we have been leading the space and moving forward into the future.”

Alacrinet today has gathered multiple accolades for its stellar services. With their every step forward, they have been recognized as a fastest growing company in North America by Inc. 5000.

Alacrinet was also named as the ‘IBM’s Partner of the Year 2020’ across all disciples. They have also been ranked No.1 in the IBM partner channel.

Progression Over the Years-

Two years ago, Alacrinet acquired a pen testing company and since have been bringing new lines of services. Once pen testing was added with the many services of Alacrinet, the team could then easily offer it to their existing customers. It also helped them bring in new prospects.

Pen testing being a low-price and low-risk product increased Alacrinet’s engagement with its clients. It is a primarily compliance-based service that almost all the customers have to do.

How Pen-Testing Made a Difference?

Alacrinet is a team capable of round out entire cybersecurity offerings. But by offering a pen-test initially made a great impact on their customer base. Clients came back to them because of the kind of suggestions Alacrinet provided them. Because clients saw how much more intelligent the Alacrinet team was compared to the other pen-testers, it became easy for the company to widen their customer base.

“This is the thing with pen-testing, you get in there and you get to see how the company is set-up technology-wise.”

Pen-testing gives you an insight about the company’s tech stack around cybersecurity. And this also exposes all the vulnerabilities of all other platforms or even the lack of platforms. Based on these results, the team can make some very strong suggestions to their customers.

“We help predict a customer’s future and lack of a bad outcome by helping them decide and make a change to their environment.”

Alacrinet’s Arsenal of Products and Services-

The second-most important service is that of Pen Testing.

The third category of Alacrinet’s solutions is the Managed Security Services Provider (MSSP). So, once you implement a cybersecurity solution, you need it managed by experts. And with Alacrinet’s experts, you can manage that easily with their SOC (Security Operations Center).

The fourth service that has taken off pretty quickly in the past 18 months is that of Cybersecurity Staffing. If your company wants to manage security in-house and does not have the appropriate resources for it, Alacrinet will provide with the best staff for it.

“What makes us different? The ability of one vendor to be able to provide that breadth of services.”

Attributing to the strengths of Alacrinet is their varied portfolio they have to offer. When you choose to work with Alacrinet, it removes the need for you to look around for this level of support from multiple vendors.

“Our goal is to take pen testing by storm. We have a new way to do pen-testing and I think that is going to grab the customers’ attention and excitement.”

It is just pen testing done smarter. What is going to make it really exciting is the use of Security Validation based tools like Panera to do continuous pen testing. This new way of performing pen tests will help identify the gaps and risks of customers in real-time. One won’t have to wait until those open areas of risks fester and turn into problems.

Summing up Brian’s excellent career graph in three tabs wouldn’t do justice to the growth he has seen with Alacrinet, but if one had to, it would go something like-

But what stood above all was his love for programming.

After his graduation in 1996, the world was leading into the era of .com. So this posited Brian with two opportunities from the recruiters

“Of course, I chose the programming position.”

IBM was trying to keep their programmers elite. And when Brian entered IBM, it was like a paradise for programmers with so much to learn.

Brian talked to a bunch of his colleagues and instigated to leave IBM without actually leaving.

“Let’s become a partner channel for IBM. We’ll resell all of the enterprise software solutions.”

And that is how the company was born. In 2002, they started Alacrinet, and became one of the premier IBM enterprise software partners.

“I am happy that we are able to grow Alacrinet into a nationwide company. And that has been my goal for the past seven years.”

Achievements that Have Set a Benchmark-

Alacrinet as a business has been able to grow beyond their core strength area. There has been a tremendous penetration of cybersecurity in the markets nationwide. Across the country, in different markets, different customers are now validating Alacrinet as a leader, which is something the entire team is really proud of.

“I have had the opportunity to work with some of the best people.”

Building the team of Alacrinet has been one of the most creative processes, says Brian.

Bouncing ideas off of each other has worked as the best strategy. This has helped them to come up with better ideas and bestowed them with success at every step. 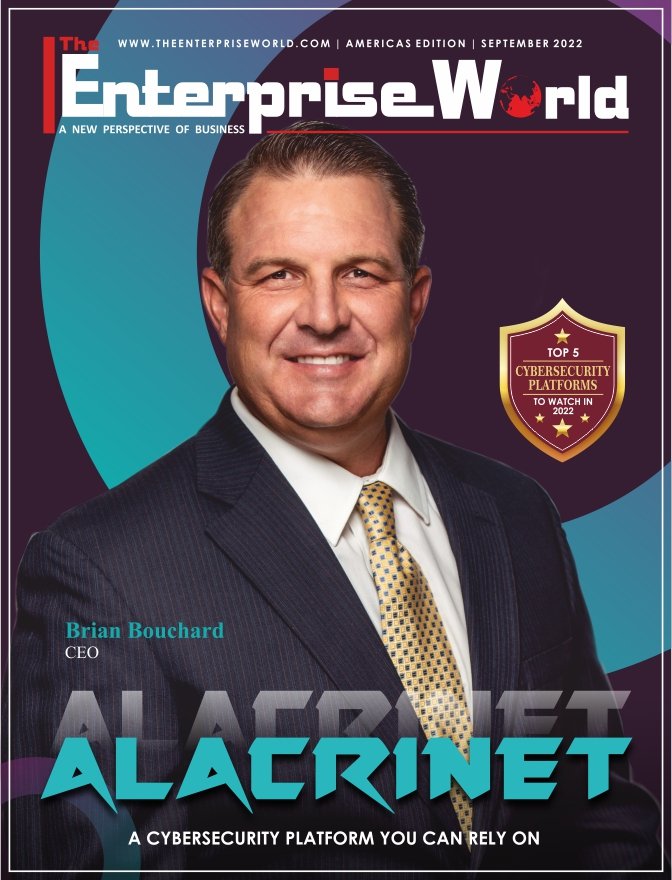 Top 5 Cybersecurity Platforms To Watch In 2022