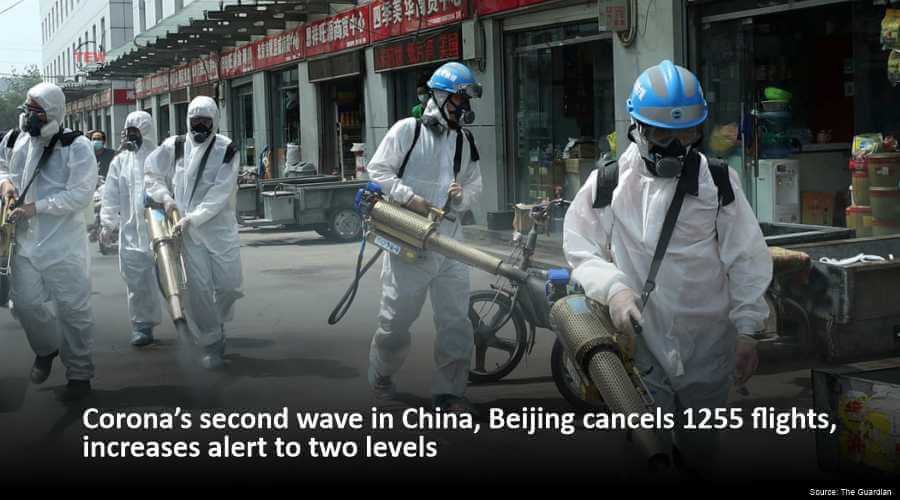 The spread of the coronavirus in China has caught pace again. In the last week, about 150 new cases have been reported in Beijing, after which the alert has increased.

Once again due to the Second wave of Coronavirus in China, the situation seems to be uncontrollable. In the last ten days, many new cases of coronavirus in Beijing, now China has decided to cancel many aircraft. According to the news agency AFP, about 1255 flights from Beijing Airport have been canceled.

Let us know that this week, there have been around 150 cases of coronavirus in Beijing, which started from a market. Since then, Beijing China has been on the alert and is being considered as the second wave of Coronavirus.

The coronavirus was introduced in China in December when initial cases were reported in Wuhan. By February, there were frequent cases of coronavirus in China, but after that, the pace continued to decrease. In March, new cases in China were reduced among about 84 thousand cases.

After this, China slowly started to reopen the country, first opened Wuhan and then the rest of the area was opened. But now earlier this week, the Second wave of coronavirus starts in Beijing, 36 new cases appeared in a market in Beijing, after which the market was closed and the speed of the test was increased.

About 150 new cases have been reported so far. Beijing’s administration has now increased Corona’s alert to 2 levels, as well as issued an alert in many areas adjacent to Beijing. After this, the crowded markets are closed, to be investigated at a large level. The schools have been closed again.

While the scientists in the UK have claimed that the common steroid drug dexamethasone reduced deaths in critically ill hospitals by up to a third. The results are part of a UK-based RECOVERY trial, one of the world’s largest randomized trials of drugs to treat COVID-19 patients.

Let’s hope the world will find a vaccine on this hidden enemy very soon.

PrevFacebook May Soon Make Dark Mode Available on its App.
Flipkart will deliver goods to your home within 90 minutes, partnered with logistics start-up ShadowfaxNext