Coronavirus: Crude oil prices drop to below zero in the US due to the lockdown 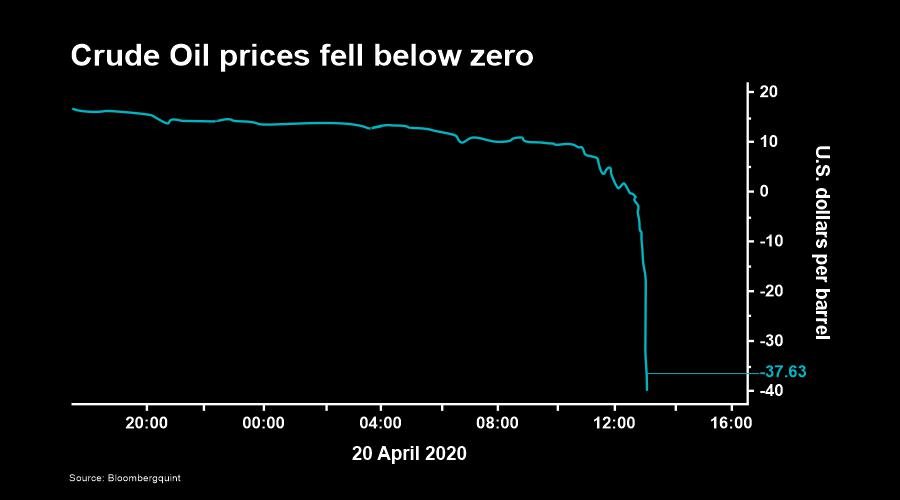 Due to the lockdown, people are currently in their homes, airports are jamming around the world, and this has reduced the demand for fuel, resulting in crude oil. The downfall in crude oil demand and limited capacity to store oil, reasons for the crude oil price drop.

West Texas Intermediate (WTI) is considered as the benchmark for US oil prices. crude oil price drop below zero to -37.63 a barrel. If no one buys the produced oil then there is a big question rises for oil producers about storing the oil.

Given the difficulties in storing oil, oil producers have now hired tankers to hold surplus stocks. But that has had an impact on US oil prices, which have plummeted to below zero. So American companies are now worried about where to store the oil produced and the falling prices of oil.

The fall in the United States on Monday affected oil markets around the world. Brent, an international oil benchmark, also saw an 8.9% fall in crude oil prices. The crude oil price drop to $26 a barrel here.

As the storage capacity is depleting and oil production continues, crude oil prices are likely to drop further in the future. The situation will only improve if the global demand for crude oil increases. But right now it depends on the global health crisis.

The coronavirus has caused three billion people worldwide to stay in their homes. Therefore, the demand for oil has decreased by almost three times. In March, oil prices hit an 18-year low. Crude Oil prices were falling due to OPEC not agreeing to the decision to cut oil production.

For recent and latest updates regarding business news, industry trends etc. Please subscribe Newsletter from “The Enterprise World” at “Subscribe

PrevCoronavirus: 2400 thousand cases worldwide; 165000 deaths so far
‘Where is Kim Jong-un?’ Is he is in Grave Danger?Next