People Saying No to Notes! 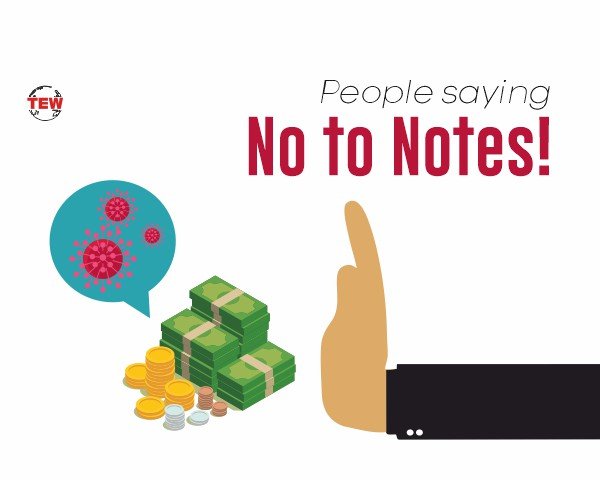 Due to the Corona Virus pandemic, retailers are asking customers to wear masks, maintain social distancing, and avoid cash as far as possible. However, scientific evidence indicates that cash or notes do not spread to (COVID-19). Yet there is a strange lethargy among all the people regarding the use of cash. People going cashless around the World.

When the corona is at its peak, banks in China and South Korea have begun the process of disinfecting destroying germs and quarantining notes to slow the spread of the coronavirus.

The Bank of Canada has asked retailers to stop refusing cash because this is causing trouble to those who depend only on cash for payment.

Despite all these assurances, fear of the spread of the virus can increase the habit of digital payment and reduce the use of cash in society.

Although digital payment systems such as Apple Pay, Venmo, and Google Pay have become widely popular in recent years, these Digital payment apps were not meant to replace the cash system nowadays. In fact, due to these applications, there is no major shortage in the notes which are in circulation.

A global crisis acts as a catalyst for fundamental changes. For example, the Västburga loot from a helicopter in Sweden gave birth to a Cashlash Society there. Due to the series of frequent burglaries in shops, banks, and even buses, Sweden reduced the trend of cash to protect its workers. The cash trend in Sweden is gradually decreasing, where it was 39 percent in 2010, it decreased to 13 percent in 2018. Currently, about 20 percent of retailers in Sweden no longer accept cash or cash.

Sweden’s central bank Riksbank announced in 2017 that they wanted to initiate a pilot program to understand the feasibility of e-krona, a national digital currency in the country. Recently Riskbank has started a joint technical project with Ascender to decide the technical aspects of e-krona.

The Bank of Canada seems to have a keen interest in re-thinking the cash trend and re-forming the role of the Central Bank. This was indicated in the latest job post of the central bank. Designing and starting the central banks’ digital currency would be ‘like starting a program of major social importance.

The proposed digital currency will protect the privacy of the user but it will not provide the same Benami facility as is found in cash transactions. It is intended to be accessible, indicating that all Canadian citizens will be able to use digital currency, even those who do not have a mobile phone or bank account.

Ever since cryptocurrency has come under discussion, people’s interest in blockchain is increasing. Many countries have started experimenting with digital currency. As many central banks are trying to get into the race to develop a digital currency, Therefore, governments should first test whether such a step will help the economy. Citizens should also think with mind before getting caught in this mess because there will be serious issues related to privacy with National Digital Currency.

Fact Check: Scientific evidence indicates that cash or notes do not spread to Covid-19. Yet there is a strange lethargy among all the people regarding the use of cash.

PrevVisakhapatnam – A City of Destiny!
Is FinTech Replacing the Banks?Next