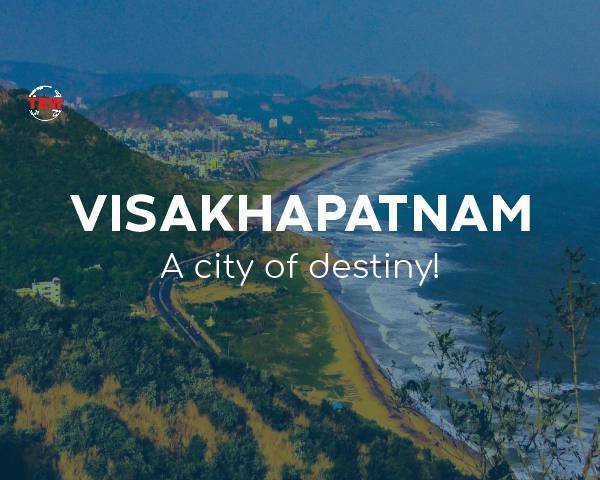 Visakhapatnam – A City of Destiny!

Visakhapatnam (Vizag) is a port city in Andhra Pradesh and is often referred to as the “A City of Destiny” and “jewel of the east coast”. It is situated on the southeastern coast of the Bay of Bengal, surrounded by the Eastern Ghats to the north and west. It is the second-largest city in Andhra Pradesh. Historically, the city was named after Vishaka, the deity.

The Economy of Visakhapatnam

With time, Visakhapatnam has developed into an economic hub. It was once a small fishing village, which has now become one of the most developed industrial centers in South India. All important departments like Pharma, IT, Fishing, Import, and Export are located in this city.  As fishing is the main occupation of the people, being an international port, there has been a considerable increase in trade and business in the city. Ports play an important role in the city’s economy as they contribute to the development of certain industries such as steel, petroleum, and fertilizer.

There is a waterworks factory in Visakhapatnam A city of destiny. It is a natural and safe seaport. The states of Andhra Pradesh, Madhya Pradesh, and Orissa which are rich in agriculture and mineral wealth widely use this port for businesses. It is also a notable fishing center. The second largest of the fastest growing cities in Andhra Pradesh and Asia, the city has industries, shipbuilding, a large oil refinery, huge steel, and power plant hub.

The film industry is booming and famous across the length and breadth of the State and the South. Vizag houses the Ramanaidu Film Studio atop a hill. The serene location has witnessed the filming of many Telugu and a few Hindi blockbusters.

The Indian Navy has taken advantage of the deep and natural port of Vizag. Vizag is the headquarters of the Eastern Naval Command (apparently). In addition, DRDO’s Naval Science and Technical Laboratory (NSTL) is one step ahead in underwater weapons research and making the Navy self-sufficient.

The Attractions of the Visakhapatnam City of Destiny!

The city is the main tourist destination of Andhra Pradesh and has many caves, beaches, wildlife sanctuaries, and the Eastern Ghats, which are worth visiting the city. Dolphin’s Nose, a rocky headland located 358 meters above sea level, to the south of the city. It got its name because it looks like a dolphin’s nose.

The Bora caves are important both historically and religiously and are popular for their beautiful creations of stalagmite and stalactite. Ramakrishna Beach is known for the pure water of the Bay of Bengal. The place also houses the Kali Temple, a submarine museum, and the VUDA Park. Visakhapatnam district is also known for many other tourist destinations such as Araku Valley, Kailasagiri Hill, and Submarine Museum.

Vizag has emerged as a paradise for travelers. There are many types of resources available to entertain travelers. Beautiful seaside, beautiful hills, natural valleys, and the modern city infrastructure; There is something for everyone here. Vizag city of destiny is surrounded by hills such as Sri Venkateswara Konda, Ross Hills, and Dargah Konda. While Vizag has earned a reputation for preserving its two-and-a-half-thousand-year-old culture, it is one step closer to the future. In business centers, you see organized chaos. You are peacefully taken to different beaches. One must visit Visakhapatnam to expand business wings and taste the peaceful life!

Chennai, The Gateway Of South India