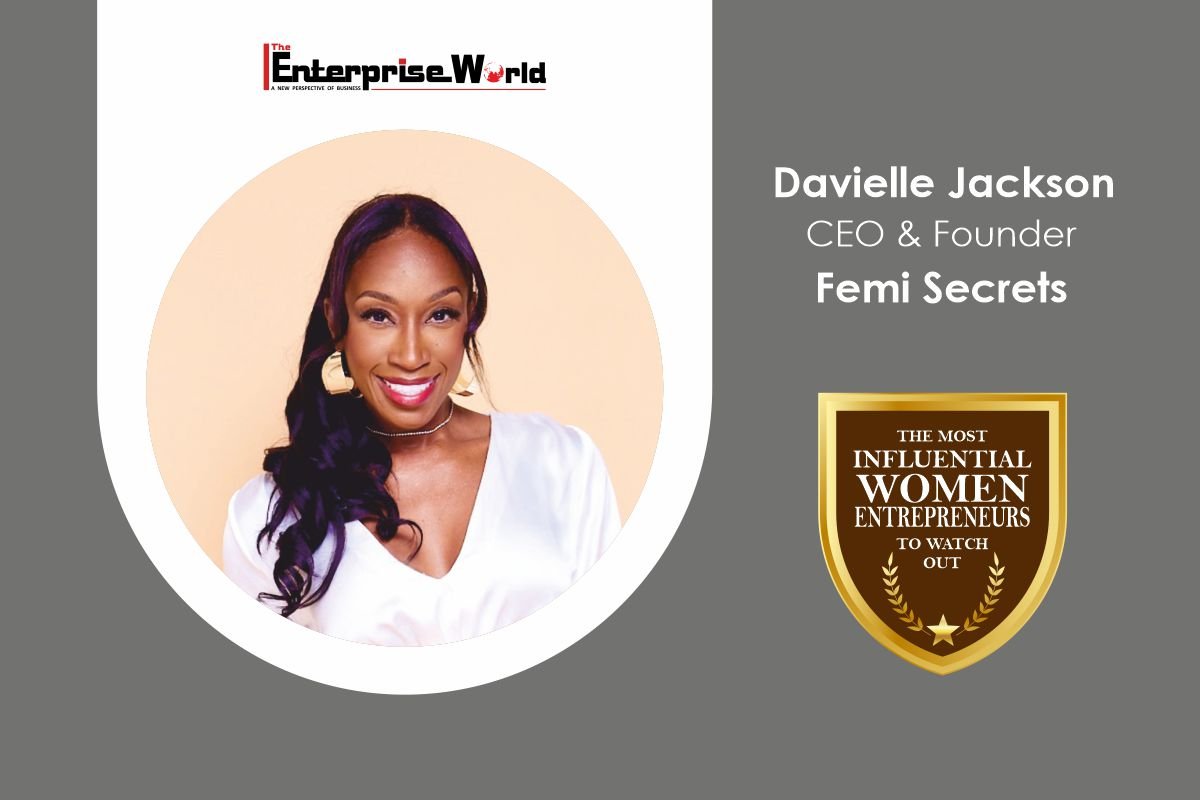 Women across the world have had this heartbreaking experience of the death of their favorite underwear during their periods. Depending on the flow of your cycle, it is the underwear that makes a huge difference during the menstrual cycle. Just the way you might choose from a variety of feminine hygiene products like sanitary pads, tampons, and menstrual cups, the new option available for you is of period panties.

Now, many women have had their doubts about this new concept, questioning its effectiveness.

Period panties have gained popularity in being ecologically sustainable and also a smart economical choice.

Featuring for The Enterprise World’s this issue of The Most Influential Women Entrepreneurs To Watch Out is Davielle Jackson, an innovative entrepreneur making feminine hygiene hassle-free and clever with Femi Secrets

Davielle has had years of experience in the marketing sector, managing sales and other aspects for other companies prior to becoming the CEO of her own firm. She has been the number one sales representative in about four different Fortune 500 companies, while also studying pre-med.

Gathering her experience in these different fields, Davielle started out on a mission to innovate feminine hygiene products, to make it hassle-free for women across the globe.

The Journey of Femi Secrets-

The idea of Pretty Panty, the first ever disposable period panty was invented by Davielle back in 2012. A journey that started years ago, the brand today is known as the most trusted brand for women, was actually then incepted in the year 2018.

“The vision of Femi Secrets was offering a solution to women, which happened to be 8 out of 10 women suffering from heavy periods and basically risking their lives trying to “stop a leak”.”

A period, the most natural occurrence of a woman’s life, its every month, and YET they choose to suffer in silence and depression about it. It was about time to change that and break the taboo. Davielle decided to fix the problem.

Easy, healthy anxiety-free periods. She developed the Pretty Panty, which offered leakproof, safe periods to women who were out of options. Women who then started using Davielle’s products stated saying how she “saved their vaginas” and how using the Pretty Panty made their periods lighter, with fewer cramps, and no odors.

Davielle then became the “Vagina Saver” and Femi Secrets the brand was born.

Davielle’s first-ever challenge was going from medical school to being a full-time entrepreneur and CEO in a matter of just six months.

“Nothing but the test of time can prepare you for such a thing.”, she says.

Entrepreneurship is not just about your intelligence, it is more about your experience and your wit to tackle different situations.

Being a woman, a black woman and a young woman also worked not so much in her favor. Davielle was not respected by her peers, the CEOs and Inventors. They just saw her as the “little black girl with dreams”. They could not see her as the female Jeff Bezos but for women with periods, which she is.

With every step there came a different challenge. Overcoming the first set of hurdles, of being recognized by the group of her peers, the next step was to enter into the culture of sharks. To be frank, it is a scenario where you need to eat or be eaten to be a CEO.

She had to work closely with so many other CEOs, investors, and business owners, who would turn a deaf ear to her innovative ideas, but have other ulterior motives.

“With my vision, and a strong belief in God and myself, and above all, being the voice for women helped me sail through that.”

Women faced difficult situations, and they needed a strong voice. A voice that would help them communicate their problems and also find a solution for them. Davielle’s gut and feat of standing up for all of these women helped her make a revolution in their lives.

“So, I fought every day, stayed focused, and dedicated to helping women. Still today, this is the reason, I fight.”

“The way I have been able to change so many women’s lives even at this early stage in my career is just mind-boggling. In a world that we live in today, where everything is mandated EXCEPT the products women use in the most sensitive, vernacular and most important part of their bodies, yes, women need me.”, says Davielle.

“We are a multi-million-dollar brand set to disrupt the entire market.”

Femi Secrets is a triple-based brand, DTC, B2B, and Retail. The firm dominates the market in monthly subscriptions. They dedicate themselves to innovating and creating products that serve women. Products that will make their lives easier and healthier.

Pretty Panty, you grab this one panty on your cycle, you don’t need to get panties or tampons. You don’t have to shove anything in your body causing it pain and harm, you don’t have to put your hands in blood, causing an opportunity for bacterium transfusion, which THEN leads to more problems. You get this one Panty, The Pretty Panty, put it on, and throw it away. It doesn’t get easier than that.

“I will continue to rock the boat and challenge the brands in the market.”

With her innovative products, Davielle has inspired many current and up coming brands in the space. Davielle was the first woman to be in Wal-Mart and Target with 100% ownership of her brand, who decided to say enough was enough. Now many brands try hard but can’t compete.

“As a Scientist, there is always a method to my madness.”

There is a secret behind Femi Secrets products as every woman who uses the products have healthier vaginas and lives. And now the Femi Secrets has reached a point where they are always innovating and creating many products that will continue to elevate and change the lives of women monthly and daily. When asked what’s next for Femi Secrets Davielle stated,

“I would say it is definitely not ordinary.”

Femi Secrets has had tremendous growth. Davielle is a Scientist at heart but has also had extensive sales, marketing a management training in her early career by top Fortune 500 companies.

Davielle was always the top performer in the massive brands. So, when she decided to run her own firm, she didn’t expect anything less. Has it taken, blood sweat, and tears? absolutely.

She has recently received the most genuine review from a man who bought Femi’s product for his wife. On how the Pretty Panty stopped her from having unbearable and debilitating pain from periods. He went on to buy a year’s subscription immediately after first buying it.

“We call it the “Pretty Panty Effect” buy one box, try it, then buy 4. It’s a thing! And we love it. So, no matter what I had to go through to get here, I would do it all over again, to help one person.”, says Davielle.

“My team is filled with driven and passionate individuals.”

In Femi Secrets’s employee onboarding contract where they literally state break rules, think big. Not in an “insubordination” way but in a “free think” way.

“I encourage my team to build strategies from their core because I want to see how they think, what they can come up with that I have not. I am not one, to give assignments. When I hired you, you know the job, the description now do it!”, says Davielle.

Now of course anyone who has ever worked for Davielle may say her goals are unreachable and crazy. But in the defense, being partnered with Wal -Mart 6 months after creating her own product, no one would have thought that was doable as well, all at 25. Then, it was unheard of!

“We also state very clearly in interviews, this is an aggressive, competitive environment, not for the weak. We want to be clear so that we hire the correct people. And we have. My team is a bunch of risk takers, I like to call them the “Avengers”. No job is to big or too small. Creating and establishing new ways to get healthier products to women all over the world.”, says Davielle.

Sanitary Hygiene and the Global Scenario- What Davielle Says-

Miles to go. Is this really the scenario for women across the globe regarding sanitary hygiene?

“Absolutely! Access to healthy and non-detrimental feminine care products continues to be a global issue. At Femi Secrets, we pride ourselves on leading with education. Not just healthy products.  Fem care and hygiene have been such taboo issues and conversations that it has led women to suffer in silence. They just think “periods are painful, stressful, stinky, etc”) that is not the case.

Women should not be thinking this natural occurrence of the life cycle, that leads to procreation is a horrible thing. That’s why I created Femi Secrets, to help women access their voice and feel better during this time of the month. Thus, creating happier and healthier women each month.” 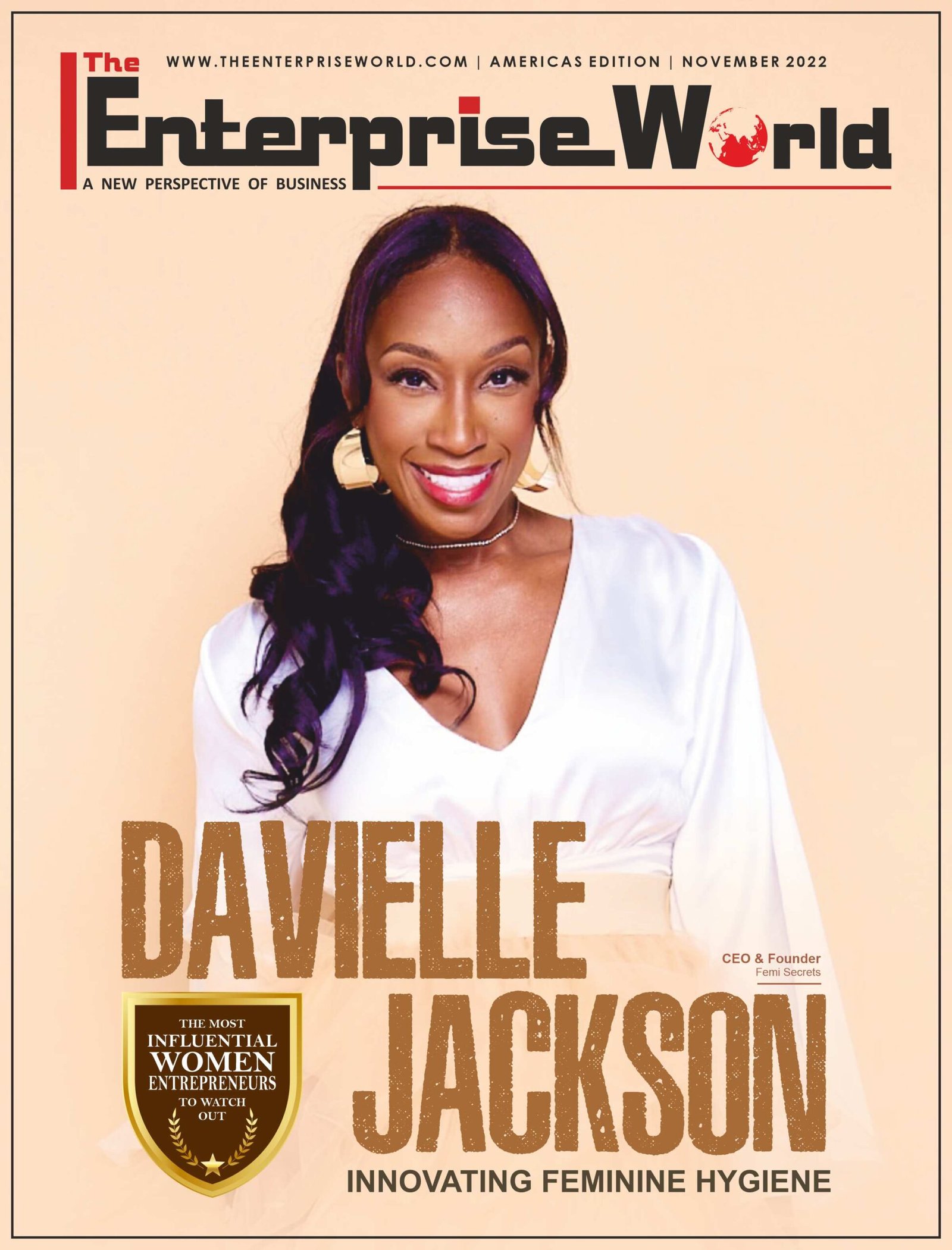 The Most Influential Women Entrepreneurs To Watch Out