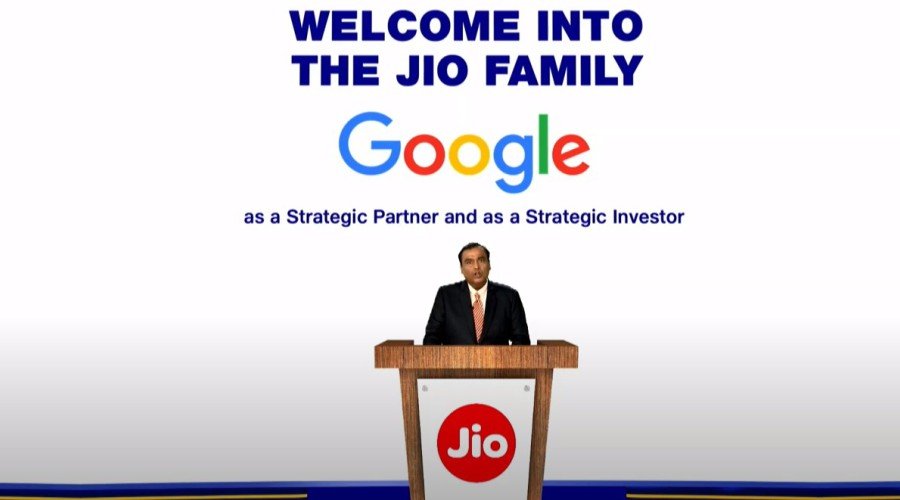 Google will buy a 7.7 percent stake in the company by investing INR 33,737 cr i.e $4.5 Billion in Jio platforms. Jio Platforms is the digital service venture of Reliance Industries, under which the telecom company Reliance Jio Infocomm comes. This investment of Google is the 14th investment in the company since April 22. Prior to this, several private equity firms including Facebook and Qualcomm have invested in the company.

This news has come when just on Monday, Google announced that it will invest around 10 billion dollars i.e. INR 70 thousand crores in the field of digital technology in India in the next five to seven years.

During the conversation, Sundar Pichai had said that India is the fifth-largest economy in the world. The company will invest $ 10 billion over the next 5-7 years. Regarding how the investment would be made, he had said that Google would invest equity in big companies, start-ups, and partnership businesses. That means Google will buy a stake in such companies. In addition, Google will also spend on digital infrastructures, such as the company’s focus on building and developing data centers.

In the interview, when Mukesh Ambani was asked about investing in Jio and Voda-Idea, Mukesh Ambani neither answered yes nor replied to this deal. Earlier in May, there were reports that Google could buy a 5 percent stake in Vodafone-Idea. However, this news was later denied by Vodafone. Vodafone had said that no talks are going on in this direction officially.

Google will have the largest stake in the Jio after Facebook. Facebook has invested a whopping Rs INR 44,000 crore for a 9.99 percent stake in Jio. Since then dozens of investors have invested in the company so far. Mukesh Ambani has risen about INR 1.18 lakh crore by selling a stake in Jio.

PrevSingapore Economy on the Edge of Recession; Government Blames Lockdown
The Biggest Cyberattack on Twitter, Many Verified Twitter Accounts have been Hacked.Next