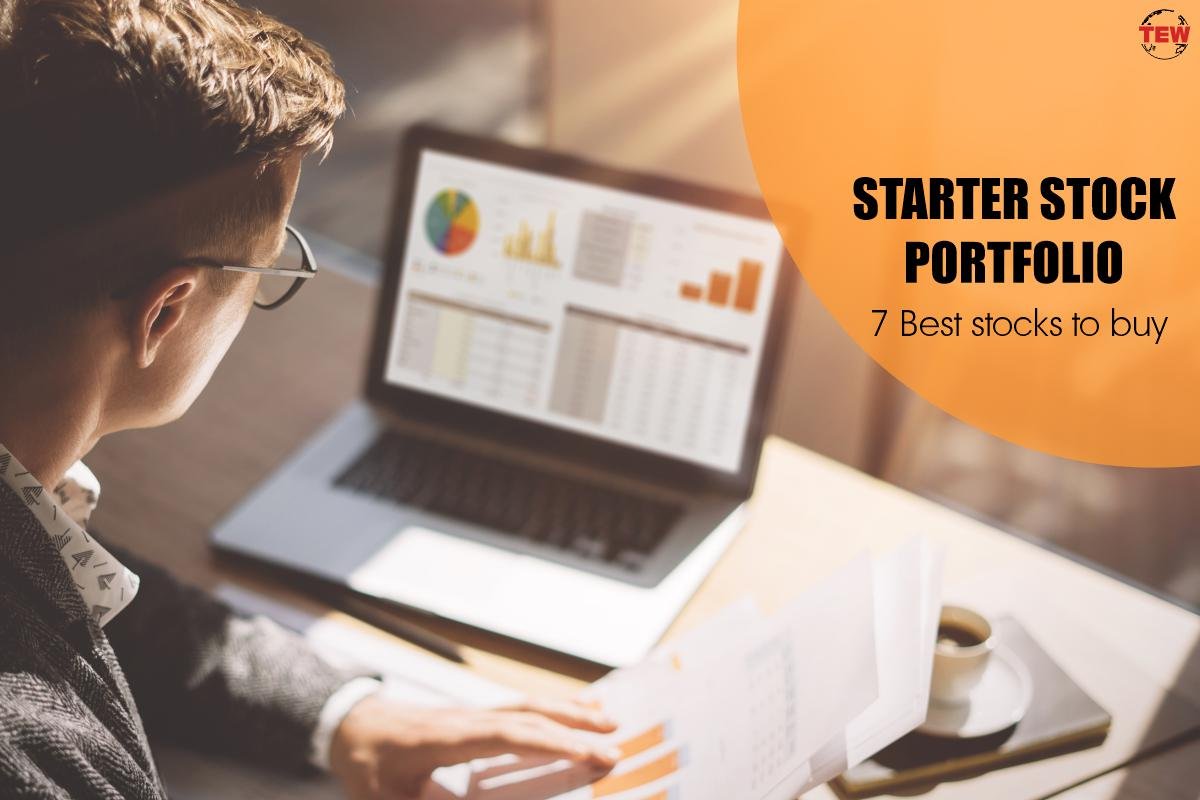 From this article, you will understand which stocks to buy for first stock portfolio.

For many investors, investing in a low-cost index fund on a regular basis is the simplest and most secure way to build long-term wealth. The stock market is very efficient, and defeating it over time is tough for both professional fund managers and ordinary investors.

A substantial margin of safety is provided by focusing on long-standing enterprises with robust balance sheets, significant cash flow, and important goods and services. Warren Buffett said it’s much better to acquire a fabulous firm at a fair price than a fair company at a wonderful price.

Here are the top seven stocks to buy for first stock portfolio:

The corporation behind the iPhone, iPad, Mac, and App Store has grown over the years to become the biggest publicly listed firm in the United States, with a market worth of $2.4 trillion. Apple, founded in 1976 by Steve Jobs, Steve Wozniak, and Ron Wayne, continues to outperform sales and profit projections owing to its continually updated portfolio of innovative products and services.

As of March 2022, the corporation had a trailing 12-month operating margin of 31% and $25.7 billion in free cash flow. Apple is down 17.9% this year through July 12 amid a fall in tech markets. Given how strong its fundamentals remain despite the market slump, Apple’s present pricing may be a steal.

The next greatest investment for novices is Visa, the most valuable publicly listed credit services corporation, valued at around $470 billion. It’s a worldwide corporation with a global reach (it operates in more than 200 nations and territories and has 3.6 billion cards in circulation), and it’s quite simple to grasp. Every time a Visa card is used, whether online or in person, Visa takes a percentage of the transaction.

With the contemporary economy gradually moving toward a cashless world, this is a low-risk firm with long-term development prospects that remain promising. Furthermore, Visa trades at a discount to its closest immediate rival, Mastercard Inc. (MA), with a forward price-earnings ratio of less than 26 to Mastercard’s forward price-earnings ratio of 35.

Apple may have a monopoly on the smartphone industry with the iPhone, but Microsoft remains a formidable competitor in computer hardware. Microsoft’s goods and services are highly recognized and in high demand globally, including brands such as Windows, Office 365, Edge web browser, LinkedIn, Surface Pro, OneDrive, Xbox, Halo, and Gears of War.

Despite a year-to-date stock decline of 24.6%, Microsoft has excellent fundamentals and promising prospects for its core business. Despite commanding the majority of the world’s desktop PCs, Microsoft has recently begun a transition to cloud computing as its primary software. Given Microsoft’s subscription-as-a-service strategy, the transition to cloud computing is projected to improve profits. Furthermore, Microsoft’s game sector is expanding, aided by tailwinds from the pandemic lockdown.

Berkshire Hathaway has expanded into a worldwide conglomerate under the leadership of Warren Buffett and Charlie Munger, with diverse assets in businesses ranging from insurance to energy, utilities, rail, food, consumer goods, and financial services.

Berkshire is down 7.3% for the year so far, compared to the S& P 500’s 19.9% loss. Occidental Petroleum Corp. (OXY), HP Inc. (HPQ), Citigroup Inc. (C), and Paramount Global are among Buffett’s significant purchases this year (PARA).

Last but not least, is Bank of America, the second-largest publicly listed bank in the United States, with a market capitalization of about $400 billion. Rising interest rates are one of the primary themes predicted to dominate financial markets in 2022, and banks have generally benefited greatly from rising rate environments, as the difference between what they pay for deposits and what they charge for loans widens.

Furthermore, as a large national bank, BAC benefits from improved macroeconomic circumstances such as the growing property market, tight labor market, and overall better financial status of the American consumer.

The company’s net charge-off ratio, a statistic that measures defaulted extended credit, is approaching 50-year lows at 0.2%. BAC is another wonderful addition to any beginner’s stock portfolio, with a 1.7% dividend, a P-E ratio of around 15, and a lack of obvious headwinds.

Although best known for its Google search engine, Alphabet also owns a number of other popular products and services, including the Android mobile operating system, Google Chrome OS, Adwords & Adsense, the Google Play app store, and even hardware such as Google Home, Pixel, Chromebook, and Google Wifi.

Although Apple is the biggest tech business by market capitalization, Alphabet undoubtedly wins in terms of ubiquity and visibility. Alphabet has exceeded analyst expectations for first-quarter 2022 results by increasing revenue, cash from operations, and earnings per share. In addition, the IT behemoth recently announced a 20-for-1 stock split, which will take effect on July 15. Given that both share classes now trade over $2,000 per share, this split will make Alphabet’s shares considerably more accessible to regular investors.

Coca-Cola is one of Warren Buffett’s longest-tenured holdings, and for good reason. Coca-Cola, one of America’s most prominent beverage corporations, sells about 4,100 distinct drinks under 500 well-known brands such as Coca-Cola, Diet Coke, Coca-Cola Zero, Sprite, Fanta, Minute Maid, and Powerade.

However, Coca-Cola’s strength and network impact are not confined to local customers. Thanks to its 250 bottling firms, 900 manufacturing units, 27 million retail locations, and 79,000 workers, its goods are also extensively disseminated and consumed globally, with high sales in Europe, the Middle East, Latin America, Asia-Pacific, and Africa.