For the First Time in History, Top Executives of TATA Group Companies will Face Salary Cuts 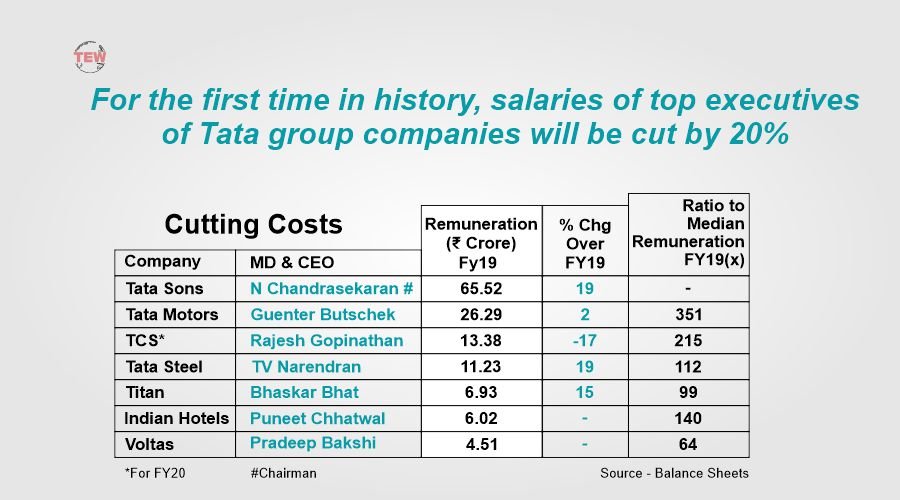 As part of efforts to reduce expenses, the Tata group for the first time in its history will cut the salaries of all CEOs of Tata Sons chairman and associate companies. The group will cut the compensation of these officers by about 20%. Sales commission and bonus etc. are included in the compensation. Tata group aims to set an example for younger employees.

Tata Consultancy Services (TCS), the group’s flagship and highest-profit Company, first announced a cut in the salaries of its CEO Rajesh Gopinathan. Indian Hotels has already said that the senior leadership of the company will contribute some percentage of its salary in this quarter in this period of crisis.

CEOs and MDs of Tata Steel, Tata Motors, Tata Power, Trent, Tata International, Tata Capital, and Voltas will also take less salary. Officials aware of this decision of the company have said that there will be a reduction in the bonus for the current financial year.

A top CEO of the Tata group, on condition of anonymity, said, “There has never been such a time in the history of the Tata group and at this time some tough decisions need to be taken to save the business.” He said, “To ensure the right leadership, we will take all steps with sympathy.” The Tata group’s culture has been to protect the interests of employees as much as possible.

Tata Sons president N Chandrasekaran had earlier told that each group company would review its HR policy, revenue plans, and cash flow management. CEO remuneration in the top 15 companies of the Tata group increased by an average of 11% compared to FY19 as compared to FY18, while FY18 increased by 14% compared to FY 2017. However, these figures are not 100 percent accurate because some CEOs joined during the financial year. Except for TCS, no other entity has published the annual report for FY 2020 so far.

PrevOne More Deal: US equity firm KKR has announced an investment of $1.5 billion in Jio Platforms
There will be No India-China Border Trade This TimeNext