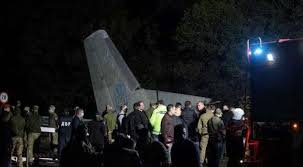 A Military plane crash took place in Ukraine on 25th September. Military plane crash in Ukraine. 22 people have died in this incident. Two people are seriously injured. Four people are said to be missing. Relief and rescue work is going on. According to the information, a total of 28 people, including crew members, were aboard the crashed aircraft of the army. The plane is said to have crashed during the landing. The plane was engulfed by flames.

The employees present on the spot managed the fire after a lot of hard work, but by then it was too late. Relief work at the place of accident is being done at a rapid pace. 24 people trapped in the plane were immediately evacuated to the nearest hospital for treatment.

The doctors declared 22 people dead in a Military plane crash.

The treatment of two people is underway.  Four people are still missing. The missing people are being searched.

Anton Gerashchenko, Deputy Minister of the Interior of the Government of Ukraine, has posted a video of the accident on Facebook. In this video, at night, the aircraft is seen engulfed in flames near the road, the smoke is rising upwards in the sky. Later released footage shows him inspecting the debris near Chuhuiv City. The investigation has started on what caused the accident.

An eyewitness car driver said that he saw flames rising from the plane after a Military plane crash; a person also saw burns in these flames. He told that another car came and stopped behind us. We resorted to firing extinguishers to save the cadets burning. We managed to save two people in critical condition.

At the time of the accident, there were a total of 27 cadets of Kharkiv University of Air Force operated by the Ministry of Defense.