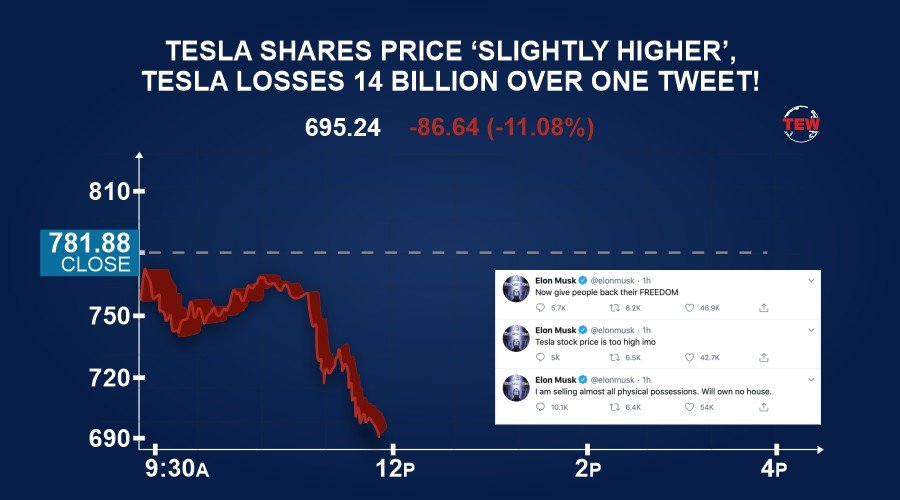 His tweet reduced the market value of Tesla by as much as 14 billion. Musk tweeted that his company’s Tesla shares price was “too high”, and as a result, some investors stepped out.

In all, Tesla shares price fell in value, and Musk’s own stake fell by three billion. One of the many tweets from Elon Musk was – “Tesla stock price too high IMO,” meaning ‘I think Tesla shares price is too high.’ In another tweet, he said that he has decided to sell all his property, so his girlfriend is angry with him.

A Wall Street Journal reporter contacted Musk on Friday. Asked if he was joking about the Tesla shares price, and whether the text was checked before he posted it, Musk replied “No”. Shares of electric car maker Tesla have risen sharply this year.

Security analyst Daniel Eves told Reporters: “Elon Musk’s statement is somewhat irresponsible and is a headache for his investors. Wall Street is upset.”

In 2018, Musk tweeted about the future of Tesla’s New York Stock Exchange. “We have a lot of financial backing and I’m thinking of privatizing Tesla by deregistering it,” Musk tweeted. This led to a sudden crash of the company’s shares. Elon Musk was fined $20 million by the US Securities and Exchange Commission, saying such statements affect the stock market.

Not only that, but Musk had to admit that he would check with lawyers before posting anything after that. And Tesla was told to make sure it didn’t happen again. Outbreaks of the coronavirus have led to a number of restrictions in the United States. Earlier this week, Musk tweeted harshly about it.

In 2019, Musk appeared in the court over a controversial tweet about a British diver trying to rescue children trapped in a cave in Thailand.

Prev“The spread of the coronavirus from Chinese laboratories, we have evidence” – The US foreign minister
If negligence occurs, the situation will become worsen; WHO warns countries to ease lockdownNext