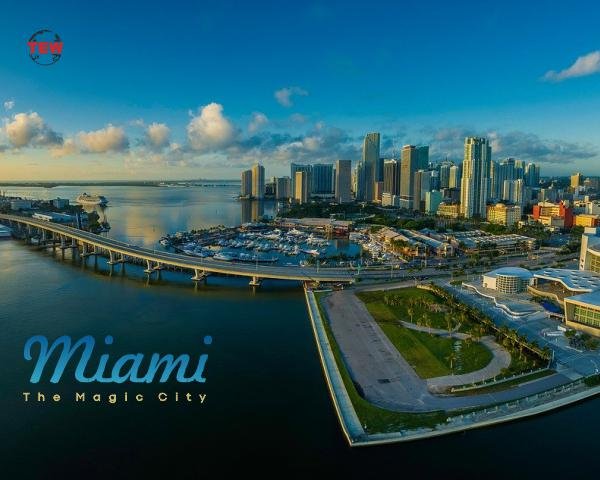 Miami City is the cultural, economic, and financial center of Florida in the United States. A 2019 estimate of the population of the city makes it the sixth most densely populated city in the United States. Miami’s metro area has the largest urban economy in Florida with a GDP of $344.9 billion as of 2017.

In terms of human capital, information exchange, business activity, cultural experience, and political engagement, The city ranks 31st among the global cities. In a 2018 UBS Study of 77 global cities, Miami was the third-richest city in terms of purchasing power.

The city is roughly divided into four parts, the north, south, west, and the Downtown Area. Downtown Miami forms the heart of the city and is on the eastern side with neighborhoods such as Brickell, Virginia Key, Watson Island, and PortMiami.

Downtown Miami counts for Florida’s largest and the most influential central business districts. It houses many major banks, courthouses, financial headquarters, cultural and tourist attractions, schools, parks, etc. Northwest of the Downtown is Miami’s Health District. It is the city’s center of hospitals, research centers, and biotechnology.  Some of the famous hospitals like the Jackson Memorial Hospital,  University of Miami‘s Leonard M. Miller School of Medicine are located here.

The southern side of the city has neighborhoods like the Coral Way, The Roads, and Coconut Grove. Built-in the year 1922, Coral Way is a historic residential neighborhood. Coconut Grove, established in the year 1825, is another historic neighborhood with narrow, winding roads and a heavy tree canopy. Apart from that, it also has many nightclubs, bars, restaurants, bohemian shops, etc.

Being a center of commerce and finance, the city boasts a strong international business community. Considering the level of presence of global corporate service organizations, The city is considered as an Alpha World City. It’s Gross Metropolitan Product is $257 billion, which ranks it 11th in the States and 20th in the world.

Since The city is close to Latin America, it also serves as the headquarters of Latin American operations for as many as 1400 multinational corporations. These include   AIG, American Airlines, Cisco Systems, Disney, ExxonMobil, FedEx, Kraft Foods, LEO Pharma  Americas, Microsoft, Yahoo!, Oracle, Sony, Symantec, Visa, and Walmart.

The city is well-known for its vibrant culture. Because of its young age and massive growth, Miami is also called the Magic City.

Miami International Film Festival is a celebrated event, which is held in the first week of March for 10 days. Independent international and American films are screened across the city and celebrated for the artiste. The city also attracts several musicians, singers, actors, dancers, and also orchestral players for which the city has orchestras, symphonies, and performing arts conservatories.

The city is also a fashion enthusiast and a home to several models and some top modeling agencies of the world. It hosts several fashion shows including the Miami Fashion Week and the Mercedes-Benz Fashion Week Miami.

The diverse population of The city reflects in the cuisine of the city; although it has a heavy influence from the Caribbean and Latin American cuisines. By combining these two cuisines with American cuisine, the city has formed its style of cooking popularly known as Floribbean cuisine.

One of the major bowl games in the College Football Playoff of the NCAA is the Orange Bowl. It is played at the Hard Rock Stadium every year, which also hosted the Super Bowl.

When you talk about The city the Magic city, how can you not talk about the beautiful beaches and tropical weather? The weather allows for year-round outdoor activities. Boating, sailing, and fishing are among the famous outdoor activities because of the marinas, rivers, bays, canals, and the Atlantic Ocean. Biscayne Bay is a hot spot for snorkeling and scuba diving because of the presence of coral reefs.

The largest and most popular parks are Bayfront Park and Museum Park (located in the heart of Downtown and the location of the American Airlines Arena and Bayside Marketplace), Tropical Park, Peacock Park, Virginia Key, and Watson Island.

With beautiful beaches, rocking nightlife, and also a few historic buildings, The city sure can be your next travel destination!