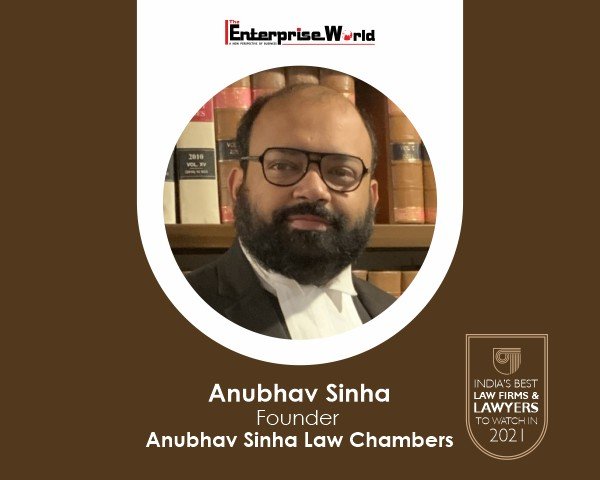 In an era of digital economy, while businesses are spreading their wings and accelerating their growth, the number of disputes, conflicts are also increasing. A good dispute resolution lawyer provides an impermeable shield to tide business entities through contentious disputes and helps them to be in the proper legal frame to reduce future risks.

Giving an end to this continuous search of businesses, Anubhav Sinha is catering to all law and litigation needs of businesses and empowering their future. At barely 38, he has already established himself as a distinguished commercial disputes lawyer with a considerable consultation practice.

Anubhav Sinha is heavily briefed by various law firms across India and his chamber deals with many international and domestic clients. His primary work revolves around Courts and Tribunals in Kolkata as also in High Courts in the states of Maharashtra, Tamil Nadu, New Delhi, Karnataka, Odisha, Jharkhand, Assam, Sikkim, Madhya Pradesh, Telengana, Andhra. He also represents Clients in various international and domestic commercial arbitrations as well as in statutory arbitral forums like MSME facilitation council.

A robust but flexible legal system is one of the essential pillars of a strong economy.

Anubhav Sinha obtained his law degree from prestigious National Law School, of India University Bangalore in 2006 and thereafter, joined L&L Partners and worked under Late Sameen Vyas. He shifted to Kolkata in late 2007 to start his journey in commercial litigation. He had no family backing and the initial years were extremely tough both remuneratively as well as to establish his name in the bar.

Years of hard work and sacrifices in all fronts of life secured a gradual passage in establishing a name for himself. Anubhav Sinha says, “I must add that all that I achieved is a tribute to my senior in practice Mr. Tilak Kumar Bose, Bar at Law, who allowed me to learn from him and provided the much-needed encouragement during those tenuous initial years of practice. He embedded in me the values of hard work and detailed legal scrutiny with regard to all matters. He remains a source of inspiration and guidance till this date.”

He distinguished himself as an arbitration and admiralty lawyer. Fame as a company law practitioner was also fully recognized.

He was recognized for his role and advocacy in various legal disputes before courts of law or in arbitrations; Many of the judgements changed and/or influenced the law significantly. His practice has continued to grow, thereafter, earning him the admiration and respect of his peers and clients alike. Today he represents some of the biggest MNCs and public sector companies and acts as an advisor to many foreign entities.

The Pillars of Success:

The key ingredients in having a successful legal practice lie in ethical and diligent work with strands of innovation. He says, “I cannot stress more on being ethical. A strong sense of ethics allows a counsel to form a sense of trust with the judiciary and I have found, during my practice, that truthful representation, without misleading the court, helps to develop a strong appreciation from the judiciary and peers.”

The A B C of the law is generally not questioned before your Lordships, just because it is the A B C.

He also has a pro bono practice and he tries to follow an ideal that nobody will be denied legal representation due to lack of funds. He represents companies, as also individuals, who are bankrupt and/or financially strained. Such companies/ individuals, would otherwise not be able to obtain proper legal representation to reinstate their market position. Anubhav Sinha’s chamber excels in providing innovative solutions and he has successfully represented various clients across the country.

The advent of hybrid court systems allows Anubhav Sinha and his team to represent their clients in various fora. He says, “A gradual increase in the team strength in my chamber and focusing on key areas like infrastructural laws, foreign investment arbitrations as well as space laws will be the key to expand my practice.”

On the Current Legal Sector Scenario:

India is seeing a drastic change in its legal landscape. Digitization of the legal processes in the way forward. It will allow lawyers from across the country to have ready access to the supreme court, different high courts, tribunals etc. It will reduce travel, expenses and will allow for a much more efficient system. The digital infrastructure has to be improved and a new age of digital litigation beckons. Online dispute resolution is the future. He also believes that legislative change is required to profit the domestic arbitration scenario in the country as the highly unregulated framework of ad-hoc domestic arbitrations remains an area of extreme concern.

PrevIdeal Image – Shaping Your Future Self
Sonia Gupta – A Passion for Justice, the Experience for the WinNext