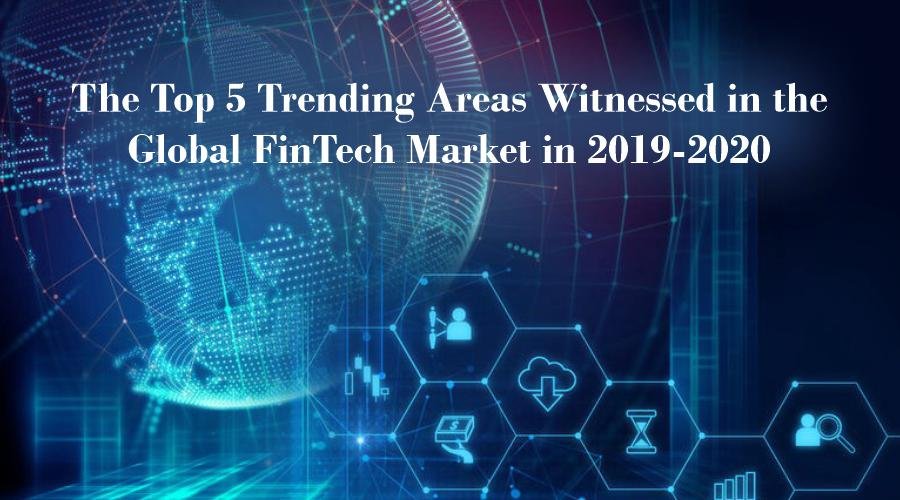 Over the past five decades, financial services and technology have been going hand in hand. The global fintech market is showing rapid growth owing to its several benefits such as cutting prices and making the financial sector more competitive. The finance sector is witnessing a great revolution as the advancements in technologies are improving finance and accounting. It has now become easier for companies to enter the international Global FinTech Market by the global economy is witnessing a general favorable effect.

The top significant trending areas in global fintech market 2020 are as follows:

1. The New Centre of Technology Innovations is Asia

Most of the action seen in the past year was in Asia Fintech. The trade war made China witness a slowdown. India overtook China for both Q1 as well as Q2 fintech investments as most of the investments were dried up for China.

The growth of payments was one of the most interesting facets of India Fintech this year. The major reason for these payments’ growth was the rise of the internet. In a matter of a couple of years, around 300 Million Indians swiftly got access to the internet and all credit goes to Reliance Jio. A number of digital business models started scaling rapidly that weren’t feasible before.

As India largely took the payments of China payments, now the country is on the battleground for the big companies like Google, Amazon, and Alibaba.

Apple played a major role in the global fintech market 2020 by picking up a relatively well-executed, already existing product, and did it even better. The experience of the apple card is sophisticated, simple, and seamless.

Social media was shocked by the announcement of Google regarding the launch of checking accounts. In addition, Facebook pay is yet another advanced and recent development, which is a common capability across all Facebook apps. Moreover, Instagram allowed its users to make purchases from the app by introducing in-app-checkout functionality. Global FinTech Market.

Thus, rather than viewing these tech companies as a competition, banks will collaborate with these giants as the distributors of banking products.

3. A Year of Financial Inclusion

While several private and public firms across the globe have been trying to solve various issues, South East Asia over the last year has suddenly emerged as a case study. Around 11% of adults in South East Asia use financial products and around 18% use a bank account. Thus, there is a lucrative opportunity for a provider of last-mile financial products in this part of the Global FinTech Market.

Gojek and Grab have conquered this part of the world with their expanded ride-sharing apps. Along with this, the firms have now started offering payment services. The expansion can happen as a lifestyle business in several parts of the world, which is a key takeaway here.

The dramatic climate patterns and extinction rebellion all across the globe have sent shockwaves across the financial services too.

Lately, the Bank of England (BoE) has presented its supervisory text on how banks must include climate risks as a chunk of their stress testing. If this is executed rightly, the central banks and financial regulators across the world will oversee climate risk management. Banks would be requested to capitalize themselves counter to climate risks that they were divulging themselves to. Global FinTech Market.

Libra could have been ranked quite high on the hashtag lists of the year as it was quite appealing on social media. Libra still has its permit despite all the negative press about anything linked with Facebook. It may not or maybe the tool that brings payments and banking to every household, but it has scared central banks and governments to act on digital currencies of their own. Global FinTech Market.

China has had to accelerate its digital currency offering due to the announcement of Libra. Although Libra’s success is not its own product if sovereign digital currencies emerge, ease of transaction and transparency can be witnesses like never before on a global scale.

PrevTop 7 Fastest-Growing Private Companies in Europe
Implanted Microchip: The Mark of the Beast?Next